By Newsroom on May 13, 2014Comments Off on Gatorade Seek World’s Best Footballers who Turn Real Work into Unreal Performance

Gatorade announced the launch of “Unreal Around the World,” a contest that encourages entrants to demonstrate how their training and hard work translates to unreal performance on the pitch. Winners of “Unreal Around the World” will receive a once-in-a-lifetime global football experience at some of the world’s most iconic clubs, including FC Barcelona, AC Milan, Liverpool, Arsenal, Boca Juniors and the Brazilian Football Confederation.

To enter, contestants will post a video to the newly launched GatoradeFootball.com that demonstrates their football handling skills, creativity and originality and draft a short essay highlighting the real work they’ve put in to improve their game.  Contest submissions will be accepted May 12 starting at 12:00 AM ET through June 12, 2014 at 11:59 PM ET and will be judged under the supervision of an independent judging organization.

The five winners of “Unreal Around the World” will embark on the one-of-a-kind journey from approximately July 27-Aug 12 with exclusive content highlighting that journey being shared on the site. 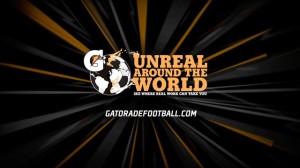 “This prize is what so many footballers around the world dream about, and something only Gatorade can offer: the opportunity to experience and train at some of the fields and stadiums of their heroes, past and present” said Molly Carter, Gatorade Sr. Director of Consumer Engagement. “Several of our team partners have opened their doors to us to make this possible. We collectively enjoy being able to provide an experience like this as it gives us the opportunity to drive the performance of elite footballers and underscores our growing commitment to the sport.”

The experience will begin at the Gatorade Sports Science Institute lab at IMG Academy in Bradenton, Fla. There, contest winners will undergo the same body composition, sweat testing and fuel analyses as other top footballers.  Results will be used to create their own customized Gatorade formula and a comprehensive sports fueling plan that will equip them with sports fueling knowledge they’ll need for the remainder of their journey.

From there, the athletes will receive pro-caliber access at elite football clubs: Liverpool FC, Arsenal, FC Barcelona, AC Milan and Boca Juniors, with the trip culminating in Brazil for a unique experience with the Brazilian Football Confederation.  The two- week journey will leave the participants with an unimaginable experience truly unique to each club.

Gatorade will promote the contest in eligible markets through multiple communications channels, plus Stadium Series events in London, Brazil and the U.S. that will bring the spirit of the contest to life through live football competition.

Gatorade Seek World’s Best Footballers who Turn Real Work into Unreal Performance added by Newsroom on May 13, 2014
View all posts by Newsroom →