By Newsroom on November 24, 2015Comments Off on General Mills Pledges to Rid Cereals of Artificial Flavours in Latest Video

General Mills made headlines this summer when it announced it would begin removing all artificial flavours and colours from its cereal products.

The company, which is one of the world’s largest food producers and distributors, called the move “a big commitment for Big G cereal.” It was just the latest step in responding to growing concerns on the part of consumers about the rumored (if unproven) health risks of genetically modified foods and those that contain flavours and colouring elements not derived from naturally occurring sources.

Parents are unsurprisingly among those most concerned about the ingredients in foods primarily marketed to children. To reinforce this summer’s message, General Mills just released a new digital campaign called “Parent Promises,” created by its agency of record, McCann New York, and animated by production studio Buck.

The message for parents: General Mills understands and shares their concerns and emotional investment in the well-being of their children. This matter goes well beyond breakfast cereals. 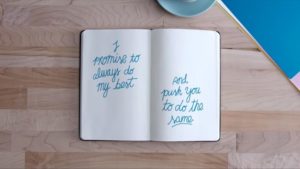 “There’s something really special about the calligraphy in this video,” says Steve Bruch, associate marketing manager of General Mills’ cereal lineup. “Like a handwritten note, it is more personal. The calligraphy and art also convey an array of emotions highlighting the humor, challenges and unconditional love that every parent experiences in everyday moments with their children.”

General Mills previously indicated it would eliminate the ingredients in question from all of its cereals by 2017 with some of the “newly formulated” boxes hitting shelves in January.

Prior to making that promise, the company moved into the organic space by acquiring Annie’s for $820 million and floated a plan to eliminate GMOs from all of its many brands (before investors balked and rejected the proposal). General Mills currently maintains an “On GMOs” page listing a number of international health groups “who have approved biotech crops to be as safe and acceptable as their conventional counterparts,” casting the GMO movement as a potential solution to food shortages around the world.

Will the public warm to a newer, greener General Mills? Only time will tell—but the rapid emergence of alternatives to its big-brand cereals shows no sign of slowing down.

General Mills Pledges to Rid Cereals of Artificial Flavours in Latest Video added by Newsroom on November 24, 2015
View all posts by Newsroom →