By Newsroom on June 5, 2017Comments Off on George Weston Foods Unleashes the Golden Crumpet in Newly Launched Campaign

George Weston Foods (GWF) has kicked off a new campaign via BMF, for its breakfast iconic brand Golden to further leverage Aussie’s love for its gloriously spongy, holy crumpets.

In order to drive frequency of purchase for crumpets, BMF introduces a story about one Crumpet that dreamed of more. More than just butter, jam, and honey; despite its family being so set in its old ways. 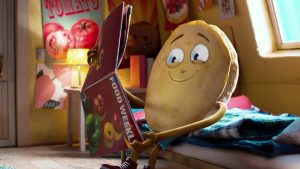 Graeme Cutler, marketing and innovation director said: “Increasing purchase frequency of Golden crumpets represents a serious growth opportunity, and will be brought to life through this not so serious, but joyous and highly engaging campaign.”

Cam Blackley, ECD, BMF added: “We just hope people can accept that in 2017 a Crumpet should be free to wear what it likes.”

BMF worked with Revolver/Will O’Rourke and Psyop in order to create a mini animated crumpet world. Each character was modelled from a real Golden Crumpet using stop frame animation.

The multi-channel campaign includes TVC, Digital, Social and a Facebook App launching in the second campaign burst in September.