By Newsroom on June 3, 2014Comments Off on Giant “Lucky” Football Boot Made of 1,500 Pringles Cans 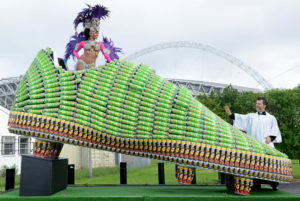 As football-mania reaches fever pitch ahead of the 2014 FIFA World Cup in Brazil, Pringles has unveiled a giant lucky football boot, which has been created from 1,500 Pringles cans, after research found 50 per cent of fans have a match day superstition.

In response, Pringles has created a giant lucky football boot from 1,500 Pringles cans, to bring luck to the England team and its superstitious supporters. Football fans across the country are invited to give the giant boot a rub for good luck as it goes on a whistle-stop tour across England ahead of the World Cup.

The boot would fit 960 normal pairs of football boots inside and is equivalent to a shoe size of 700.

Giant “Lucky” Football Boot Made of 1,500 Pringles Cans added by Newsroom on June 3, 2014
View all posts by Newsroom →