By Newsroom on March 20, 2018Comments Off on Goose Island to Auction off 12 Bottles of Bourbon County Stout on Facebook Live via Taboo 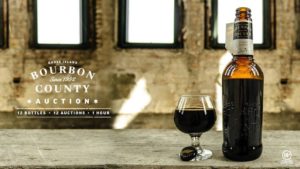 Twelve bottles of the most sought after beers in the world are being auctioned in a world first Facebook Live beer auction via The Taboo Group. At 8:30pm Wednesday 21st March, Australian beer lovers will get their chance to bid on the last case of Goose Island’s coveted Bourbon Country Stout in Australia.

Brewed in Chicago, the legendary barrel-aged imperial stout is in high demand across the globe, with American drinkers queuing outside liquor stores for hours in freezing temperatures to get their hands on it. Even empty bottles fetch up to $40 on eBay.

The event, hosted by Ale of a Time’s, Luke Smith and Goose Island’s Tiffany Waldron will be broadcast live through Facebook Live from Melbourne’s Beermash. The public will be able to bid through the comments section in twelve one minute auctions, with the winner being declared live at the end of each auction. All proceeds from the event will be donated to Pink Boots Society, a not-for-profit empowering women in the beer industry.

Waldron said: “This is going to be a fun and unique way to get your hands on the last few bottles of the world’s best bourbon barrel aged beer. All the while spending time chatting with Luke and I, plus sharing the story of Pink Booty Society and raising money to support scholarships to empower more women in the beery industry.”

The hype for the beer started 20 years ago, when the Brewers at Goose Island asked Jim Beam for some Bourbon Barrels to age their stout beer in. This experiment confirmed their reputation as innovators within the craft category.

Goose Island to Auction off 12 Bottles of Bourbon County Stout on Facebook Live via Taboo added by Newsroom on March 20, 2018
View all posts by Newsroom →