By Newsroom on October 12, 2015Comments Off on Guinness Aiming to Win Over South Korean Market with #TasteofBlack Push

Guinness is hoping its global might will help penetrate the hard to win over South Korean market as it launches a new ‘category transforming’ campaign #TasteofBlack.

The bulk of the beer market in South Korea is currently dominated by local lagers, something the Diageo-owned brand is hoping the campaign will turnaround. With a focus on bars and supermarkets the push is built on participation and tackles the main barrier for those Koreans who have not yet tried Guinness – the perception of an overly strong or challenging taste, provoked by its dark colour.

The Iris created campaign therefore focuses on the flavour characteristics of Guinness (smooth, deep, creamy, bold, rich and amazing) to encourage drinkers to reconsider or try the drink and feedback with their own taste experiences.

The campaign kicks off with a highly stylised film directed by John S Park and production company The Sweet Shop and is supported by digital, social media, on and off trade and consumer / trade promotional activity.

The campaign includes an influencer programme with three of Korea’s biggest opinion leaders, who also appear in the film, to create their own content based on their own #TasteofBlack experience, which will feature on their respective YouTube channels: 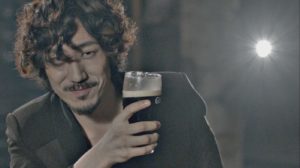 Dougal McGeorge, marketing and innovation director at Diageo Korea said the campaign is the result of the need to make a “step change” in the way it communicates Guinness. “Over the past 5 plus years, Diageo Korea has done a great job of ‘seeding’ the Guinness brand at the top end of the beer market in Korea… our challenge from this point, is to kick-off the next step of the journey. To do this we needed to make a step-change in the way we communicate about and activate Guinness.”

Consumers engaging with the campaign on social media channels will also have the opportunity to win limited edition merchandise from Guinness.

Guinness Aiming to Win Over South Korean Market with #TasteofBlack Push added by Newsroom on October 12, 2015
View all posts by Newsroom →