By Newsroom on September 18, 2017Comments Off on Guinness’ ‘Compton Cowboys’ Campaign Challenges Stereotypes to Enrich All of Our Lives

The release of a new Guinness advert, portraying the story of ‘The Compton Cowboys’, which will air for the first time in the UK on September 18. 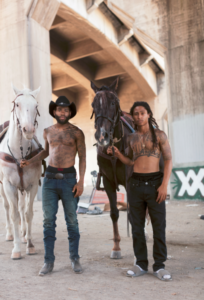 The new release is the next chapter of the iconic ‘Made of More’ series, which champions real people who have shown unexpected character to enrich the world around them.

The Compton Cowboys’ tells the story of an extraordinary group of men living in Compton, LA. By following their true passion and caring for horses, they have made an unusual yet brave choice to take a different path to that of the gang life that dominated the environment in which they grew up.

The new campaign by AMV BBDO, captures the essence of defying personal circumstances and features real-life cowboys, including the main protagonist Keenan Abercrombie, who was born and raised in Compton.

Guinness’ ‘Compton Cowboys’ Campaign Challenges Stereotypes to Enrich All of Our Lives added by Newsroom on September 18, 2017
View all posts by Newsroom →