By Newsroom on February 18, 2015Comments Off on Heineken Brings US Soccer Fans Closer to the Game with UEFA Champions League Campaign

As one of the largest supporters of soccer in the U.S., Heineken understands the plight of fans nationwide during the UEFA Champions League (UCL). Whether it’s sneaking out to a pub during lunch, or overhauling your calendar on weeknights, more than half of U.S. fans 21 and older report facing major hurdles when trying to watch the beautiful game.

To bring fans closer to the sport they love, Heineken is kicking off its 2015 #ChampionTheMatch UCL campaign. Featuring exclusive access to soccer legends via @HeinekenSoccer, new Heineken UCL packs offering contests with top prizes, and a chance to get up close with one of the most coveted trophies in sports, Heineken is bringing the glory of the Champions League to fans stateside, all tournament long.

Want to see just how far American fans would go to get their Champions League fix? Recently, Heineken conducted a social experiment, which filmed unsuspecting fans in a New York City bodega during lunch hour, and offered them a choice with a twist: go back to work, or drop everything and immediately fly to Europe to watch a UCL match live. The only catch: they’d have to bring their bosses with them. Check out the clip (above) to see how a typical lunch break turned into a legendary chance to experience the Champions League, live from Barcelona.

“As some of the biggest soccer fans in the U.S., we know all too well the obstacles fans face in catching the best that the Champions League has to offer,” said Ralph Rijks, Vice President of Heineken USA. “Through the #ChampionTheMatch launch, Heineken is bringing the thrill of the Champions League straight to fans, and packing it with top content and plenty of surprises to make their match-day experience even better.” 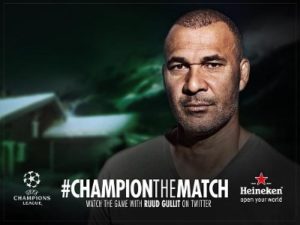 To bring the excitement of the world class tournament to fans everywhere, Heineken has launched a dedicated website, a new source for exclusive content, expert insights from UEFA legends, fan Q&A’s, and more. Fans 21 and over can also follow @HeinekenSoccer and the hashtag #ChampionTheMatch, where they can receive real-time access and “live commentary” from former players, such as former UCL champion and current Major League Soccer (MLS) star, David Villa, unexpected guests, and surprise Heineken twists during marquee matches throughout the tournament.

The #ChampionTheMatch action kicked off February 17, as Dutch legend Ruud Gullit took over the @HeinekenSoccer handle, as Paris Saint Germain faces off against Chelsea, and Shakhtar Donetsk takes on Bayern Munich. American fans can also follow the twitter handle and website for the latest and greatest soccer news and updates from the UCL, as well as the upcoming MLS season.

The latest UCL campaign also features a brand new television spot, created by Wieden+Kennedy Amsterdam, titled ‘The Match.’ The national :30 spot captures just how far one fan and his friends will go to watch the big match, wherever they are.

This year also marks the introduction of the Heineken UCL promo packs in the U.S. Fans 21 and over can purchase a promo pack, and text HNKUCL to 8500 for a chance to win instant daily prizes such as UCL branded gear, or even V.I.P. trips to a UCL match in Europe, by spinning the prize wheel. 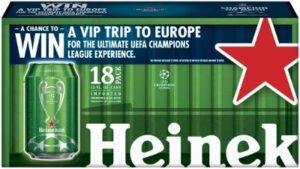 UCL fans will have an exclusive opportunity to get up close and personal with one of the most coveted trophies in sports, via the UEFA Champions League Trophy Tour Presented by Heineken. The seventh consecutive tour will cover three U.S. stops, before the epic journey comes to an end at Berlin’s Olympia stadium on June 6th 2015 for the UCL Final. During the tour, fans can take photos with the iconic trophy, see Champions League memorabilia and meet soccer legends and UCL winners in person.

Heineken Brings US Soccer Fans Closer to the Game with UEFA Champions League Campaign added by Newsroom on February 18, 2015
View all posts by Newsroom →