By Newsroom on June 30, 2016Comments Off on Heineken City Shapers Festival Invites Aussies To Open Their World 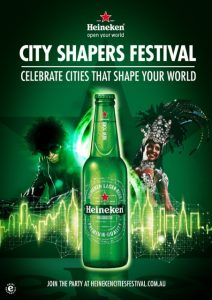 Heineken has announced the launch of the Heineken City Shapers Festival, which forms part of the brand’s ongoing Open Your World platform.

The campaign will celebrate the cultures, people, music and entertainment, and experiences of the vibrant global cities shaping our top Australian cities and underlines Heineken’s status as a leading international premium beer brand.

The campaign will include the creation of a major festival event, which will take place in Melbourne on 4 August.

The Melbourne event will see a secret, unexpected location transformed into an exciting activation space. Guests will be taken on a worldly adventure, which will begin at an iconic Melbourne train station where guests will be transported by a private train, embarking on an evening of unexpected delights. The festival will bring to life some of the world’s most dynamic cities with international food, music, art and entertainment all to be explored throughout the event. In true Heineken style, a number of big surprises will be revealed throughout the night to deliver a memorable experience for consumers. 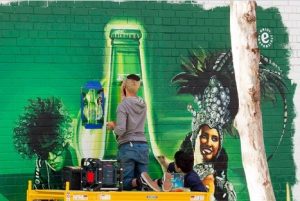 In addition to the festival in Melbourne, Heineken will activate a number of smaller-scale experiences in Brisbane, Sydney and Perth throughout July in partnership with Time Out. The publisher will curate a series of experiences and deliver unique content inspired by the vibrant cities of the world, enabling consumers to discover and be part of the cultural influences shaping their city’s dining scene, music and nightlife.

Heineken will support the City Shapers Festival campaign with digital, PR and out-of-home media. Impactful out-of-home activity will be created through a partnership with innovative street artists, Apparition Media, who will bring the campaign concept to life through a series of impactful murals. Heineken will also take over the night skyline in high traffic areas across Sydney, Melbourne, Brisbane and Perth with impressive displays to be showcased over six weeks. 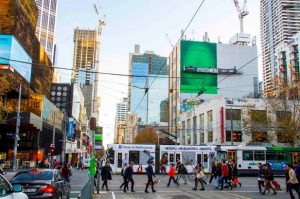 As part of the Festival celebrations, Heineken is releasing special City Edition packaging across its 6 and 24 packs, with 18 different global cities featured on the Heineken bottles. The packaging is available nationally throughout July.

Nada Steel, marketing manager, Heineken Lion Australia said: “The Heineken City Shapers Festival is an innovative campaign that was created to celebrate the most energetic and vibrant cities that have shaped our top Australian cities. Our Men and Women of the world are constantly seeking new experiences, and this campaign enables Heineken to provide consumers with worldly experiences in their city. The use of innovative out-of-home media formats, murals and light projections have been designed to not only drive awareness of the campaign, but also to evoke more emotion into the environment they appear, whilst showcasing Heineken’s progressive and premium brand image. We have some exciting events and media executions for the campaign and we’re looking forward for consumers to join us on a road to discovery.”

Heineken City Shapers Festival Invites Aussies To Open Their World added by Newsroom on June 30, 2016
View all posts by Newsroom →