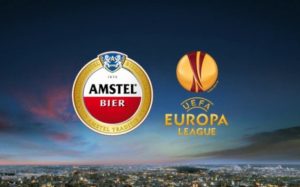 As Europe’s top football clubs gear up for another exciting season, Heineken has announced an ambitious new sponsorship of European club football, with its international quality brand Amstel becoming a sponsor of the UEFA Europa League.

The announcement sees a welcome return to football for Amstel, one of Europe’s leading beers, which has a rich heritage backing elite European football, having previously been a sponsor of the UEFA Champions League from 1994-2005.

Walter Drenth, Senior Global Director International Brands at Heineken, commented: “Amstel’s previous 11 year partnership with UEFA played a significant role in the brand becoming a truly international player in the global beer market. Amstel has a proud heritage in supporting football at different levels and we are delighted that the brand is back involved with elite European club football. With the evident synergies between the UEFA Europa League and the international Amstel brand we look forward to another fruitful partnership for years to come.”

Commenting on the announcement, Guy-Laurent Epstein, Marketing Director of UEFA Events SA said: “We are delighted to be welcoming Amstel once again into the European professional club football landscape. Amstel is a brand with historical heritage in European professional football and thus a welcome and notable addition to the UEFA Europa League commercial platform. Having Amstel on board successfully completes the commercial partner family for the UEFA Europa League 2015-18 and so we now look forward to beginning to work with Amstel and the rest of the sponsor partner portfolio towards a successful next three years.”

The new deal positions the Heineken company as the key player in European club football with its two leading brands leading the charge in the top two cup competitions of the game across the continent. Building on the existing successful partnership with UEFA, the deal also promotes Heineken and Amstel as the beers of choice for midweek football fans through Tuesday, Wednesday and Thursday and continues Heineken’s strong support of football around the world.