By Newsroom on September 3, 2015Comments Off on Heineken & Gratafy Team to Reward Beer Samples Through Social Media 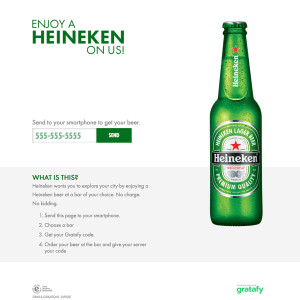 Heineken announced a new partnership with experiential marketing platform, Gratafy, to give complimentary beers to consumers (21+) in key markets nationwide in the US via Facebook and Twitter.

The campaign will connect fans in social settings through social media in Los Angeles, Chicago, San Francisco and Houston, by offering a free Heineken, Heineken Light or Dos Equis at restaurants and bars partnered with Gratafy through November.

Once the offer is activated (or following a brief survey for their time for fans in Los Angeles and San Francisco), fans provide their digital Gratafy code when settling the bill to receive their draft or bottle. This marks the largest social sampling program ever via Facebook, as well as the first time a brand has partnered to sample beer via Twitter.

“Heineken has always put a premium on reaching customers in innovative ways, and we’re truly excited about this partnership,” said Ron Amram, Senior Media Director, Heineken USA. “Facebook and Twitter are areas where our customers frequent the most, and through Gratafy, we’re connecting with them in arguably their most social setting, to offer a complimentary Heineken, Heineken Light, or Dos Equis.”

On the heels of the recent #SubwaySymphony campaign, consumers in Los Angeles, Chicago, San Francisco, and Houston will be rewarded for opening their world by receiving an opportunity to get a complimentary Heineken lager or Heineken Light— the recent two-time award winner of the Best Tasting Low Calorie Lager at the World Beer Championships. In October, to coincide with Dos Equis’ annual Masquerade campaign, customers in Los Angeles and Houston will receive an offer from the Most Interesting Man in the World himself, complimentary for a Dos Equis draft or bottle.

“We are excited to power this revolutionary program, which will offer thousands of consumers an innovative, simple, and fun way to experience Heineken’s beers at great restaurants and bars,” said Brian Erke, CEO of Gratafy.

Heineken & Gratafy Team to Reward Beer Samples Through Social Media added by Newsroom on September 3, 2015
View all posts by Newsroom →