By Newsroom on June 16, 2015Comments Off on Heineken & James Murphy Join Forces to Bring #SubwaySymphony to Life

Musician and audiophile James Murphy has an idea that could make the New York City subway a more melodic experience, and Heineken is helping to show the world how great it could be. The world-famous Dutch brewer hopes to inspire New York City residents and visitors 21 and older to see and hear the city in a new way with the latest installment of the brewer’s “Open Your City” campaign — lending its support to Murphy’s project called “Subway Symphony.”

Heineken believes in making great cities even greater, and the Subway Symphony project is a simple but meaningful way to do just that. Murphy’s idea replaces the harsh turnstile beeping noises with pleasant, melodic notes that harmonize into music, giving each station its own sonic identity.

The effort to make the Subway Symphony dream a reality will be documented in a series of video episodes that make the case for Subway Symphony and let viewers experience the musical tones created by a working prototype of the improved turnstiles. 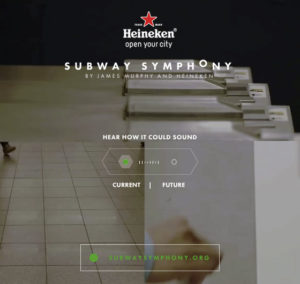 This video series debuts here and is complemented by 30- and 60-second digital spots. Heineken and Murphy hope to rally enough support for the project to potentially encourage its implementation throughout the New York City subway system.

“New York City is a beautiful, one-of-a-kind place, and the people who are willing to do what it takes to live here — deal with the crowds and the commotion and the noise — deserve a little sonic gift like this,” Murphy said. “I want to turn the cacophony of the subway into unique pieces of music. It might seem like a small thing, but that’s exactly the point. This is such an easy way to make this great place I call home even greater.”

The Open Your City campaign, with Wieden+Kennedy New York, calls on fans everywhere to push boundaries and make the most of their legendary cities. This summer, Heineken will once again feature a limited run of unique, city-specific bottles on the company’s iconic green silhouette in 14 select markets, including nine in the U.S. (Las Vegas, Los Angeles, Miami, Chicago, Boston, San Francisco, Honolulu, Atlanta, and New York).

“Heineken has deep roots in the music community, and it’s a natural fit to marry our love of music and musicians with our love of great cities around the globe,” said Ralph Rijks, vice president of marketing at Heineken USA. “Heineken is the beer from and for great cities, James is the perfect person to help us show the world how curiosity and creativity can make an incredible place like New York City even greater.”

Heineken & James Murphy Join Forces to Bring #SubwaySymphony to Life added by Newsroom on June 16, 2015
View all posts by Newsroom →