By Newsroom on September 5, 2016Comments Off on Heineken Unveils First Ad To Promote Formula One Sponsorship

Heineken has unveiled a campaign to promote its new global Formula 1 partnership at an event in Italy ahead of 2016’s Italian Grand Prix.

The launch coincides with the brand’s first Formula 1 Grand Prix where it is an official title sponsor. Publicis Italy has created two TV ads for the brewer that will be shown globally.

The first, “When you drive, never drink”, fits into its campaign to encourage responsible drinking and features former Formula 1 three-time world drivers’ champion Sir Jackie Stewart. It shows Stewart throughout his career up to the present day and shows him continually refusing to drink Heineken because he is driving.

The spot will be shown on outdoor screens at the Grand Prix track in Monza, near Milan, alongside track branding. It will be backed up with digital activations, live fan experiences, PR initiatives and packaging/point of sale activations.

The second spot, “More than a race”, features another former driver – winner of 13 grand prix – and TV presenter David Coulthard. The ad shows that F1 is not just a two-hour race, but a glamorous 72-hour event taking place in some of the world’s best cities. It will air in mid September. 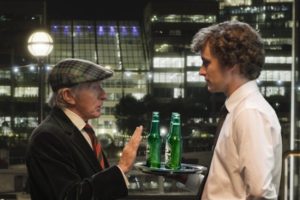 He added: “We have partnered with the ideal ambassadors for each campaign. Sir Jackie’s track record in road safety is unparalleled, with nearly 50 years of pioneering work. He’ll be heavily involved in the wider ‘When you drive, never drink’ campaign for Heineken. David embodies our ‘More than a race’ activity; he enjoyed a highly successful career as an F1 driver and now has a multi-faceted role in the F1 community.”

From the 2017 Formula 1 season onwards, Heineken will be the F1 event title partner of three Grands Prix. It will also have a significant presence at six additional events and will be the exclusive global beer partner of F1.

Bernie Ecclestone, chief executive of the Formula One group, said: “Heineken’s new campaigns are impressive. They provide impact, innovation and scale. The campaigns capture the essence of F1; safety and responsibility coupled with excitement and glamour. This is an example of why we were excited about Heineken joining the F1 family.”

Heineken Unveils First Ad To Promote Formula One Sponsorship added by Newsroom on September 5, 2016
View all posts by Newsroom →