By Newsroom on May 20, 2013Comments Off on Heinz Brings Back Invisible Bottle of Tomato Ketchup 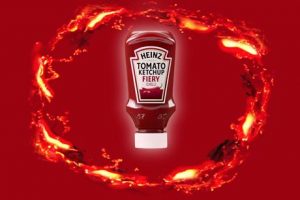 Heinz is to bring back the invisible bottle of tomato ketchup in a new ad campaign using the catch phrase “It has to be Heinz,” following the brand being featured in ‘Mad Men’ on Sky Atlantic.

The creative shop behind the new campaign is Abbot Mead Vickers BBDO and the media-buying house is Vizeum.

Abbot Mead Vickers BBDO was briefed to reintroduce the invisible bottle concept for the Heinz signature brand of tomato ketchup, while extending communication to its flavoured variants.

The first TV ad, directed by Dougal Wilson, aims to convey how a meal is incomplete without Heinz Tomato Ketchup by showing people adding sauce from an imaginary bottle.

The ad was created by art director Martin Loraine and copywriter Steve Jones and was produced by Blink London. 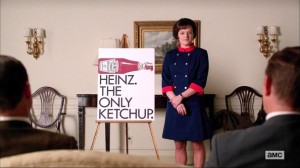 The end frame of the ad will promote the new Heinz Tomato Ketchup with Roasted Garlic, Thyme & Honey, which comes in a jar and is designed to accompany meals such as beef, chicken or fish.

The second film, directed by Keith Goddard and produced by Packhorse, will be aimed at showcasing the Heinz Tomato Ketchup with Fiery Chilli and will be on air regionally this month, followed by a national campaign.

The copywriter for the second film is Simon Welch and art director is Matt Welch.

The campaign will air over the summer months and will include a series of 30-second national radio spots to accompany the TV ads. The radio ads will feature ‘Cold Feet’ actors John Thompson and Faye Ripley talking about why they love ketchup.

According to industry figures, Heinz Tomato Ketchup is the market leader with 78.2% of the £157m tomato ketchup category.

In a recent episode of ‘Mad Men’, both Don and Pete, and then Ted and Peggy pitch for the Heinz Tomato Ketchup account.

Heinz Brings Back Invisible Bottle of Tomato Ketchup added by Newsroom on May 20, 2013
View all posts by Newsroom →