By Newsroom on March 8, 2018Comments Off on Heinz Brings in a Real Hostage Negotiator to Resolve Parent-Child Standoffs at Dinner

When it comes to dinner, your kid might as well be a terrorist, says an amusing new ad from Heinz.

A crisis negotiator offers tips on how to de-escalate the situation after a young menace discovers there’s no ketchup left to go with his chicken nuggets in the chuckle-worthy 1:15 spot, created by Taxi.

Jack Cambria, formerly of the NYPD, opens the ad with an ominous reality-style overture. “I’m here to help in case you find yourself in a tough spot,” he says.

The camera cuts to a mom, dad and their little boy, all sitting down for a meal. The kid squeezes the Heinz ketchup bottle furiously, grasping at those last drops of tomato hope. But peaceful family time is not in the cards. 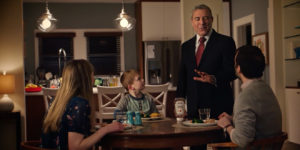 Instead, Junior is staring daggers at his father, and Mom realises in horror what’s coming.

Cambria interjects with useful pointers, as Dad tries valiantly to come to terms with his son. His efforts are, of course, futile.

In the end, the only real way out of the trap is to avoid it in the first place, by always keeping a backup bottle on hand, the expert concludes.

To support the campaign, there’s even an emergency 24-hour hotline at 1-844-HEINZ11, which parents can call for a phone tree narrated by Cambria, who offers more tips for those tough times like when their children won’t “stop saying [beep]” or “get off their smartphone device.”

Kid wants to lie on the ground and won’t get up? “Press 7” and “seek voluntarily compliance,” says Cambria. “The last thing you want to do is to look like a mad person screaming in a mall parking lot or airport terminal about how they’d better … ‘or else.’ That’s a game no one wins.” 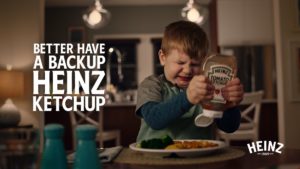 Overall, it’s an insightful little conceit, if a little reminiscent of Dove “Sketches,” and well executed from the writing to the acting. Sure, the metaphor is a little campy, but it’s aimed right at the target—parents loading up the shopping cart—and it understands their daily struggles.

“We know your own offspring is holding you hostage,” says the subtext, in a cooing voice. “We can help make it a little easier day by day.”

In fact, the most disturbing aspect of the ad is just a reflection of the horrifying consumer society it’s addressing, where food is perceived as so obscenely abundant that a kid tossing it on the floor because it’s missing a condiment comes across as funny, rather than sad.

Heinz Brings in a Real Hostage Negotiator to Resolve Parent-Child Standoffs at Dinner added by Newsroom on March 8, 2018
View all posts by Newsroom →