By Newsroom on July 19, 2017Comments Off on Heinz Develops ‘Chicago Dog Sauce’ for the City that Won’t Put Ketchup on its Hot Dogs

Every city has its own unique culinary delicacies and quirks, but few rival Chicagoans and their utter refusal to put ketchup on hot dogs.

That’s why ketchup purveyor Heinz has rolled out a ‘Chicago Dog Sauce’ for National Hot Dog Day on July 19. Made specially for Chicagoans, the sauce – which Heinz said is “made with delicious red ripe tomatoes and a special blend of spices and flavourings” – is really just ketchup in disguise.

To try and prove to Chicago’s residents that a hot dog topped with ketchup isn’t all that bad, Heinz – whose parent company Kraft Heinz is co-headquartered in Chicago and Pittsburgh – recently gave the city’s locals a chance to try out the sauce.

While some were upset when they realised they’d been duped into putting ketchup on their beloved Chicago-style hot dog, many admitted to actually liking the addition of ketchup to the usual condiment combination (which includes mustard, relish, onion, tomato, pickles, sport peppers and a dash of celery salt). 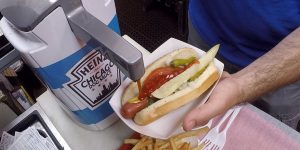 A 14-ounce glass bottle of the limited-edition sauce can be purchased online at chicagodogsauce.com for $5. The product launch is being supported by a campaign that includes print and out-of-home advertising as well as product sampling throughout Chicago.

Heinz Develops ‘Chicago Dog Sauce’ for the City that Won’t Put Ketchup on its Hot Dogs added by Newsroom on July 19, 2017
View all posts by Newsroom →