By Newsroom on June 8, 2018Comments Off on Heritage of Johnnie Walker Set to Captivate Travellers in Heathrow and Edinburgh Airports this Summer 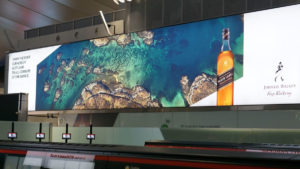 As holiday-makers whisk their way through London Heathrow and Edinburgh Airports this summer, their eyes will be treated to an array of spectacular aerial photographs of some of Scotland’s most mesmerising locations, thanks to a multi-million pound investment by Johnnie Walker and Diageo Global Travel.

Featuring stunning imagery of landscapes across the Highlands, the Islands, Speyside and the Lowland regions of Scotland, the new campaign will bring to life the heritage of the world’s most popular Scotch whisky for world travellers.

Drawing on the fact that Johnnie Walker whisky is crafted by bringing together some of the best individual whiskies from the four corners of Scotland, the new campaign celebrates what happens when great whiskies and great people come together and includes a series of feel-good films, digital and static advertising that emphasise this sentiment.

Anna MacDonald, Marketing Director, Diageo Global Travel, said: “I am delighted to launch the Johnnie Walker new campaign in Global Travel in the United Kingdom, the home of whisky. In keeping with the long-standing Johnnie Walker philosophy of progress, we recognise that in life it’s not just about where you are going; it’s about who you walk with on the journey and we are confident travellers will enjoy coming face-to-face with the history and pioneering spirit of this much-loved Scotch whisky.”

The latest in the Johnnie Walker brand’s award-winning line of Keep Walking campaigns will feature prominently on static and digital channels in both airports as well as British Airways lounges and on-board entertainment. For those travelling this summer, they will also be able to enjoy the new film on digital screens shown across permanent Johnnie Walker fixtures across airports all over the world.

John Williams, Johnnie Walker Global Brand Director, added: “A commitment to making quality whisky for quality times has always been important to us. For the best part of 200 years we’ve sought out the best whiskies from all over Scotland for people to enjoy when they get together with those who matter to them. That’s what really excites me about this campaign, it’s a chance to put a spotlight on the fact that we bring together exceptional tasting Scotch Whiskies from every corner of Scotland. I’m particularly excited to see the campaign come to life in Global Travel as we know that Johnnie Walker is synonymous with millions of travellers across the world as a Scotch whisky that people can enjoy when they get together with friends and family.”

The new Johnnie Walker campaign will be live in London Heathrow and Edinburgh Airport until September 2018.

Heritage of Johnnie Walker Set to Captivate Travellers in Heathrow and Edinburgh Airports this Summer added by Newsroom on June 8, 2018
View all posts by Newsroom →