Hershey’s Melting the Distance Between People, One Chocolate Bar at a Time

By Newsroom on September 13, 2018Comments Off on Hershey’s Melting the Distance Between People, One Chocolate Bar at a Time

From small towns to urban hubs, the Hershey’s brand is on a mission to warm the hearts of Americans. On September 13, Milton Hershey’s 161st birthday, Hershey employees are taking a break from the office and taking to the streets – of their neighbourhoods, communities and workplaces – with the simple act of sharing Hershey’s Milk Chocolate Bars. 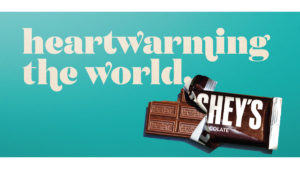 Inspiration came from not only Milton Hershey, who believed chocolate can bring people together, but also from others who are using Hershey’s Milk Chocolate Bars to create positive connections and bring their communities closer together.

Kind acts can be found in all corners of the country, and Hershey’s uncovered these special stories and partnered with the individuals who are making a difference:

“When we discovered these stories, we were reminded of what Milton Hershey knew long ago – that we could bring people closer together through the simple gift of our chocolate,” said Chuck Raup, vice president/general manager chocolate, The Hershey Company. “By the end of the day, our employees will have shared thousands of chocolate bars. Our actions on this day will pay homage to our founder, Milton Hershey and people like Bob Williams that allow us to… melt the distance between us.” 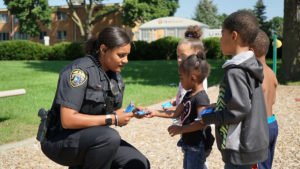 Nearly every neighbourhood in America has been experiencing a growing disconnect, creating a cooling effect among Americans. In fact, Pew Research Center surveys suggest that every year, Americans connect less with their neighbours. Armed with a dozen Hershey’s Milk Chocolate Bars, Hershey employees will start to spark positivity across the country and bring a little warmth back to our communities.

“We’ve all experienced this growing disconnect. We often see our neighbours every day without even knowing their names,” Raup said. “We know it’s the simple things that can bring us together. That is why we are beginning to break down the walls between us and warm-up our neighbourhoods, one bar at a time.” 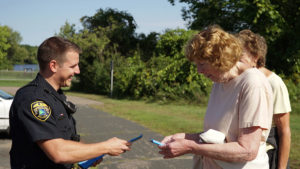 Today is a new chapter in Hershey’s legacy. Hershey’s is not only committed to warming hearts, but continuing to inspire others with the same simple act of giving a chocolate bar to melt the distance between us, each and every day. Beginning September 14, a new campaign will make its way to the world, offering inspiration through stories like Mr. Williams from Iowa and the student council of Big Springs High School– reminding everyone that a chocolate bar brings a smile to nearly everyone’s face.

In honour of the man who founded The Hershey Company and brought us the Hershey’s Milk Chocolate Bar, the company has created the “Heartwarming Project,” an initiative dedicated to helping kids and families build meaningful social connections.

“It’s clear the world needs chocolate now, more than ever. So we’re warming hearts with a simple smile, hello and, of course, chocolate.” Raup said.

Hershey’s Melting the Distance Between People, One Chocolate Bar at a Time added by Newsroom on September 13, 2018
View all posts by Newsroom →