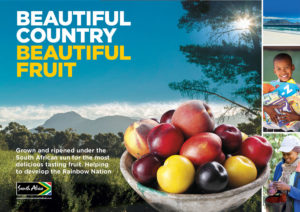 South African growers begin preparations for their 2018/19 campaign to support the development of the UK market for their fruit.

It’s the eleventh successive year that Hortgro, the organisation representing South African growers of stone fruit and top fruit, has worked with retailers, the media and directly with consumers to promote under the Beautiful Country, Beautiful Fruit banner. The initiative began in 2009 with a pilot project on plums, and rolled out to peaches, nectarines, apples and pears the following year.

A severe drought in South Africa affected volumes of stone fruit exported during the 2017/18 season. However, volumes are looking set to return closer to a normal crop during the 2018/19 season. Young orchards coming into production will also contribute to the expected increase – a 5% increase is currently expected for nectarines and 8% for peaches. Plums are likely to see a slight decrease early season, but the mid to late season volumes will hopefully bring the total export estimate up by 7% on the previous season.

Annual activity begins in the stone fruit season, which runs from November to May. This year, it will feature a promotional offer, which will be advertised on packs of South African fruit and in consumer magazines.

Hortgro will be running in-store point-of-sale material, online advertising and advertorials in store magazines – as well as head office sampling for some of its best varieties of stone fruit and presenting the yearly South African Stone Fruit Retailer of the Year award, which rewards performance and support for the category during the previous season.

As the campaign moves through the 2018/19 seasons for stone fruit and top fruit, it will be further supported with outdoor and print advertising, advertorials and editorial in the trade and consumer press, showcasing the great flavour and freshness of South African fruit, the ethical reasons for buying it and the exclusive varieties growers in the country produce.

A South Africa stone fruit–themed special supplement will be produced by Fresh Produce Journal in November, including a German version to be distributed in Fruchthandel magazine. The publication will focus on content that emphasises the work, protocols, supply chain and social initiatives behind the success in the UK and German markets.