IHOP Releases ‘Declaration of Pancakes’ via New Campaign by Droga5

By Newsroom on February 22, 2018Comments Off on IHOP Releases ‘Declaration of Pancakes’ via New Campaign by Droga5

IHOP launched a new TV and online campaign called “Declaration of Pancakes” to promote everyone’s favourite upcoming holiday: IHOP National Pancake Day, which the restaurant will celebrate by giving away free pancakes to everyone in America.

The spot, created by Droga5 New York, opens on a scene reminiscent of 1776 and the signing of the Declaration of Independence. The Founding Fathers are gathered around a table in a moment of great significance, reflecting on the momentous occasion and what the signing will mean for all Americans. 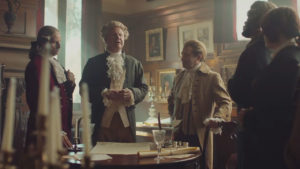 All of a sudden, we realise that we’re not watching a scene from 1776 at all. We’re watching a team of pancake enthusiasts who have hijacked a museum exhibit to carry out an elaborate cosplay in the name of IHOP National Pancake Day.

The spot was shot with director, Randy Krallman, and production company Smuggler. The 30-second and 15-second cuts of the “Declaration of Pancakes” spot will run on TV US-wide, while the long-form will run online and across social channels.

IHOP Releases ‘Declaration of Pancakes’ via New Campaign by Droga5 added by Newsroom on February 22, 2018
View all posts by Newsroom →