By Newsroom on November 29, 2016Comments Off on Introducing oomi – Next Generation Noodles 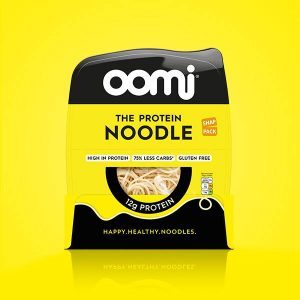 Long before anyone knew what a CrossFit box was and leggings became an essential item of designer wear, noodles were just noodles. But things have moved on since then, the Paleo Diet has taken the world by storm, NutriBullets adorn shop shelves and ‘normal’ noodles sit next to Udon noodles, curried noodles and low carb varieties.

Now it’s time for the humble noodle to take its next step as oomi launch onto Tesco shelves in January 2017.

oomi have produced a gluten free noodle that contains 75% less carbohydrates than your average noodle, but also manages to pack a serious protein punch, with nearly 13g of high quality protein per serving.

Relevant for anyone living an active and healthy lifestyle, the low carbohydrate levels of oomi are great news for waistlines, whilst their superior protein source, sustainably sourced white fish, provides important nutrition to support exercise.

As with fresh noodles, oomi also offer a high level of convenience. Available in can be thrown in a wok, heated in a microwave and even eaten cold from the pack in vibrant salads. Everywhere consumers would use regular noodles they can simply make the swap to oomi.

Most importantly oomi noodles’ combination of quality protein and noodle convenience creates a food with purpose.

Introducing oomi – Next Generation Noodles added by Newsroom on November 29, 2016
View all posts by Newsroom →