By Newsroom on March 8, 2016Comments Off on Jacob’s Creek & BNP Paribas Open Serve Up the Perfect Match 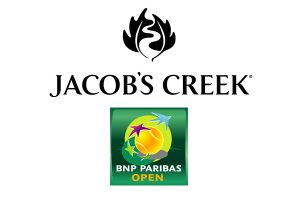 Jacob’s Creek has announced a new partnership with the BNP Paribas Open as the official wine and promotional partner. The annual event, which takes place in Indian Wells, Calif., from March 7-20, is the biggest two-week combined ATP World Tour and WTA professional tennis tournament on the planet.

Ticketholders will be able to find Australia’s largest wine brand at concession stands, restaurants, suites and throughout the Indian Wells Tennis Garden.

“As a long-standing supporter of professional tennis, Jacob’s Creek is thrilled to partner with the BNP Paribas Open this year,” says Greg Berumen, Brand Director at Pernod Ricard USA. “It seems very fitting for the world’s most awarded winery to pair with one of the biggest combined tennis tournaments on the globe. We feel that we’ve made the perfect match.”

Jacob’s Creek has been supporting professional tennis since 2006 through its sponsorships of the Australian Open, the China Open and the US Open.

However, in 2016 the world’s most awarded winery will be rooting for current World No. 1 ranked men’s tennis player Novak Djokovic, who is also star of the winery’s “Made By” film series. The documentary tells the story of the people, places and passions that have helped personally and professionally shape Novak into the champion he is today.

Jacob’s Creek & BNP Paribas Open Serve Up the Perfect Match added by Newsroom on March 8, 2016
View all posts by Newsroom →