Digital publisher Concrete Playground has announced a brand new series of video and editorial content as part of a broader native campaign, created in partnership with Jameson Irish Whiskey.

The content series, dubbed The Rewriters, is the latest native campaign project from the Sydney-based publication. It will appear on Concrete Playground — winner of Best Website at 2015’s Create Awards — over six weeks in March and April.

Concrete Playground was appointed to work with Jameson to extend the whiskey brand’s current ‘Sine Metu’ global campaign rollout. The Rewriters articulates the stories of selected young Australians who have stepped out of their comfort zone and escaped the safety of routine to try something new through engaging editorial and short-form video content. Episode One, launched last week, tells the story of Ramblin’ Rascal Tavern owner Charlie Lehmann, who threw in the corporate towel to open his own bar. Readers also have the chance to win a money-can’t-buy experience with each of the featured creatives.

Says Valeria Catterini, brand manager, Jameson: “Concrete Playground is a great fit for Jameson and the perfect partner to bring to life the meaning of ‘Sine Metu’, the Jameson family motto meaning ‘Without Fear’, in a culturally relevant way.” 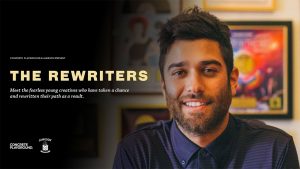 In the past few months, Concrete Playground has attracted a diverse range of native clients including Corona, Qantas, Nike, Westfield and the Australian Rugby Union. Recent creative projects include Cubby House, a one-day cultural festival produced by Concrete Playground in partnership with Secret Garden Festival; The Catch, an experiential partnership with Heineken for the release of Bond film Spectre; Downtown Drive-in, a drive-in cinema sponsored by Audi; and a series of four seasonal banquets created for James Squire.

Says Rich Fogarty, founder and director at Concrete Playground: “As a publisher, working with innovative marketers who understand the dynamic publishing and media landscapes is paramount. We’re fortunate to partner with the team from Jameson, who get that bringing to life a native campaign by focusing first on the editorial narrative benefits the reader, the brand and the publisher.”

Says Sam Egan, executive producer at Entropico: “It’s great to see brands adapting to the digital landscape by pairing up with publishers like Concrete Playground to create original and engaging content. The Rewriters is a great brief for Entropico as we love to work in the pop culture space, especially when celebrating the daring young creatives of our city.”

The Rewriters series can be viewed on Concrete Playground now.