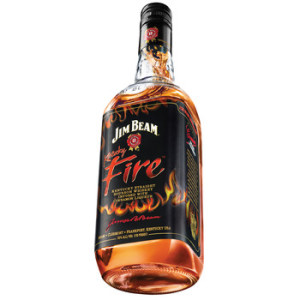 Jim Beam Bourbon is kicking things up a notch with its third flavoured whiskey offering. Jim Beam Kentucky Fire, the latest flavoured bourbon expression by the Beam Suntory brand, features the flavour of red hot cinnamon liqueur to deliver a fiery kick and a smooth finish that makes for a perfect shot.

“We’ve led the category in flavour innovation in recent years with Red Stag by Jim Beam, Jim Beam Maple and Jim Beam Honey, but our latest flavour certainly turns up the heat,” said Chris Bauder, General Manager of Whiskies at Beam Suntory. “We’re thrilled with the initial excitement we’ve seen for Jim Beam Kentucky Fire and are thrilled to continue to bring new and interesting flavour options to our fans and those who are new to whisky.”

To support the launch, Jim Beam will release a collection of digital videos featuring the ultimate cinnamon bourbon-inspired shot rituals for Jim Beam Kentucky Fire fans – proving that there is truly no wrong way to get #FiredUp. These videos are available on Jim Beam’s social channels including Facebook, Twitter, and YouTube.

As part of the brand’s digital marketing campaign in support of the launch, Jim Beam’s digital AOR, Mekanism, will run the digital videos on various online, mobile, social and experiential channels, such as Facebook, Twitter, YouTube, ESPN, AOL, Kargo, Viacom, and NBCUniversal.

The digital advertisements will run through early November 2014.