By Newsroom on March 1, 2018Comments Off on John West Unveils New ‘It’s a No From John West’ Campaign by JWT Melbourne

John West has unveiled a new campaign which takes the viewer right back to the source; out on the open sea to view which fish are accepted, and those that are rejected by the leading brand.

Created by J. Walter Thompson Melbourne, the new, ‘It’s a No from John West’ campaign reinforces the brand’s iconic proposition that ‘It’s what John West rejects that makes John West the best’. 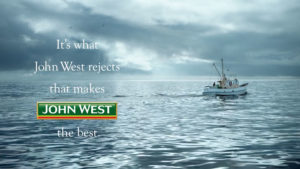 Kieran Antill, executive creative director, J. Walter Thompson Melbourne said the campaign aimed to creatively bring the ‘No from John West’ concept to life in an engaging format, reminding consumers of the lengths that John West goes to reinforce its uncompromising quality.

Antill said: “The brand has a long history in Australia with its core proposition ‘It’s what John West rejects, that makes John West the best’, but it needed to be reinforced to ensure relevance to a younger and ever price-conscious consumer. Research also showed that because the line hadn’t been used for a number of years, many Australians had lost touch with its meaning, or in the case of younger audiences, were not aware of it at all. Many marketers would kill for a brand line as great as ‘It’s what John West rejects that makes John West the best’. Ok, yes it’s long but its meaning is worth it. It takes a decisive decision by a brand to say enough is enough and in this case our task was clear – let’s get back the enduring message of rejection that underpins the quality of all John West products – the power of saying no!”

The campaign returns to the traditional style of John West advertising, but modernised for today’s younger audience with a humorous approach to educating the audience on the brand’s rigorous inspection processes. 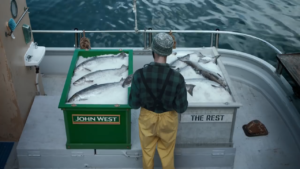 Antill continued: “The spot has three great performances from the voice of authority; to the iconic John West fisherman; and the fish that didn’t quite make the cut. Hats off to director Jae Morrison and Blockhead for coaching this little fish in his debut performance.”

Suzanne Harman, GM marketing, Simplot Australia added: “John West says no a lot. No to standards that compromise the quality of our product. No to practices that affect the sustainability of fish populations. The new campaign sets out to dramatise ‘No’ to give it meaning and use it as a demonstration of our commitment to quality.”

John West Unveils New ‘It’s a No From John West’ Campaign by JWT Melbourne added by Newsroom on March 1, 2018
View all posts by Newsroom →