By Newsroom on September 19, 2014Comments Off on Johnnie Walker Becomes the Official Whisky of Formula One 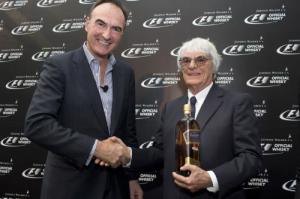 Johnnie Walker, one of the world’s leading Scotch Whisky, announced a new partnership with the Formula One group that will enhance the brand’s global positioning and significantly expand the platform for its highly successful responsible drinking initiative, Join the Pact.

The announcement of the new multi-year arrangement, which also sees Johnnie Walker become the Official Whisky of Formula 1, was made at an event at the Conrad Centennial Hotel in Singapore by Nick Blazquez, President of Diageo in Africa and Asia, ahead of this weekend’s 2014 Formula 1 Singapore Airlines Singapore Grand Prix at the Marina Bay street circuit.

Dr Blazquez said Johnnie Walker, as a pioneering whisky brand with a progressive spirit, was the perfect whisky to partner with the world’s most progressive and technologically-advanced sport.

The new partnership greatly strengthens the historical connections that the Walker family has with the world of motorsport and Grand Prix racing which go back to the 1950s. Building on those historic links, in 2005 Johnnie Walker established a partnership with McLaren Mercedes which, over the past nine years, has enabled the brand to deliver successful marketing and responsible drinking programmes around the world.

Speaking at the announcement, Nick Blazquez said: “Becoming the Official Whisky of Formula 1 will enable Johnnie Walker to greatly extend its reach to race fans. As a result of our new arrangement, we will have access to a global television audience of more than 450 million people and a track attendance audience of around 1.5 million every year.

“Equally important, and a key reason for Johnnie Walker to become the Official Whisky of Formula 1, is the huge opportunity we have through this expanded global platform to reach even more F1 fans around the world with responsible drinking messages.

“We believe there is great potential in what we can achieve together. The Johnnie Walker Join the Pact campaign is a proven, powerful programme that is already driving positive change. More than 1 million people around the world have signed the Join the Pact pledge to ‘Never Drink and Drive’. We are therefore announcing today our intention to increase our investment behind this programme, activating it in new territories with an ambition of gaining a further five million personal commitments over the next four years.” 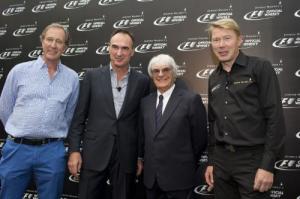 “Since 2006 I’ve travelled to some 40 countries talking to media, consumers, governments and other stakeholders about the importance of our call to action. Through Join the Pact well over a million people have pledged never to drink and drive, that’s one million people who would never actively have made this commitment without the programme. The new partnership that the brand has forged with the Formula One group is an enormous boost to our campaign and will significantly expand the scale of this wonderful initiative by reaching out to many millions more people around the world.”

Joining Dr Blazquez and Mika Häkkinen on stage was Bernie Ecclestone, Chief Executive Officer of the Formula One group, who said: “This is an exciting sponsorship for Formula 1. I have admired the way that Johnnie Walker has entered into their sponsorship of Formula 1 to not only achieve commercial benefits but to also highlight the importance of responsible drinking. It is a great example of how an alcohol brand can dedicate time and money to be a force for good.”

The new arrangement reflects historic connections between the Walker family and the world of motorsport and Grand Prix racing which goes back to the 1950s when the late Rob Walker established his own private racing team. His great-great-grandfather was John Walker who founded the whisky business in a small shop in Scotland in 1820.

The Rob Walker Racing Team were pioneering privateers in the world of Grand Prix racing and became the first private team to secure victory in an FIA Formula One World Championship qualifying Grand Prix with legendary driver Stirling (now Sir Stirling) Moss in Argentina in 1958.

The announcement in Singapore was attended by Rob Walker’s son, Robbie, with a collection of memorabilia from that great era of World Championship Grand Prix racing.

Johnnie Walker Becomes the Official Whisky of Formula One added by Newsroom on September 19, 2014
View all posts by Newsroom →