By Newsroom on March 6, 2017Comments Off on Jose Cuervo’s New Ad Encourages People to Live in the Moment Since ‘Tomorrow is Overrated’

Jose Cuervo has released a YOLO-esque campaign created by CP+B LA that the tequila brand hopes will appeal to those who like to live in the moment.

Running under the new tagline ‘Tomorrow is Overrated,’ the campaign’s centerpiece is an apocalyptic two-minute video that features a group of bar goers who aren’t bothered by the chaos and destruction taking place outside of the bar’s doors.

Instead of panicking when a TV newscaster proclaims that “the end of civilization is upon us,” the crowd inside of the bar decides to have some tequila-drenched fun while Elvis’s ‘It’s Now Or Never’ plays on the jukebox. As the bar’s walls begin to shake and crumble, the patrons dance with each other while downing shots of Jose Cuervo.

The video, which was directed by Ringan Ledwidge, is airing as a one-minute spot on television. The ‘Tomorrow is Overrated’ campaign also includes 15-second pre-roll ads that juxtapose mundane tasks with exciting ones – for example, one ad contrasts the sounds of a boring conference call to music playing at a concert.

“At tequila’s core is an energy and excitement that sets it apart from other alcoholic beverages. But all we see on TV is a string of bottle beauty shots, agave fields and sweaty rocks glasses,” said Daniel Mandelbaum, group brand director at Jose Cuervo, in a statement. “With over 220 years of tequila-making experience, it’s our duty to remind people that tequila is the ultimate catalyst to fully embrace the moment you are in right now.” 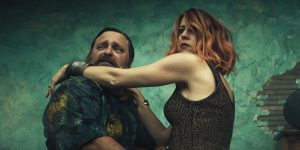 The campaign marks CP+B’s first effort for the brand after McCann New York dropped the account in late 2015.

Jose Cuervo’s New Ad Encourages People to Live in the Moment Since ‘Tomorrow is Overrated’ added by Newsroom on March 6, 2017
View all posts by Newsroom →