By Newsroom on October 1, 2015Comments Off on Joy Scales New Heights for Johnnie Walker at the Explorers Club

In celebration of its launch of the new Joy Will Take You Further campaign, the largest global campaign for Johnnie Walker to date, the whisky brand last night hosted an exclusive event at the New York City headquarters of The Explorers Club, the world-famous non-profit organization.

The evening featured household names, renowned explorers and the announcement of analytical chemist and world famous Scotch whisky blender Jim Beveridge as a new member of The Explorers Club.

The focal point of the gathering featured a unique panel discussion on the power of joy and personal success, with notable speakers such as pro football Hall of Famer and Live! with Kelly and Michael co-host Michael Strahan, screenwriter and creator of the HBO television series and feature film Entourage Doug Ellin, inventor and world’s fastest female motorcycle rider Eva Hakansson, and psychologist and leading happiness expert Dr. Matt Killingsworth. 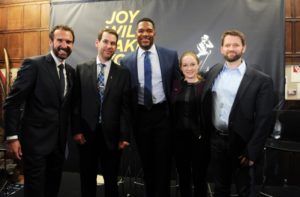 Brian Cox, Director of Scotch Whisky, Diageo North America said of the event: “We feel extremely privileged to have Johnnie Walker and our Master Blender Jim Beveridge welcomed into the inspirational halls of The Explorers Club, a group which illustrates that Joy Will Take You Further. The study of joy and progress – something that we call Joynomics – is exemplified by the personal stories of our panel speakers who show us that happiness makes success more likely.

“Members of The Explorers Club have explored the furthest reaches of land, air, sea and space and having stood on the summit of Everest and the surface of the moon, are living proof of how finding joy in our everyday lives and pursuits can help us achieve more than we thought possible.”

Michael Strahan championed the impact that happiness has had on his progress: “If your starting point is happiness, there is no limit to what you can achieve. The turning point in my football career was adopting a more positive outlook and reconnecting with the enjoyment of genuinely ‘playing’ the game. Making that decision gave me a new impetus and new energy.”

The Joy Will Take You Further event also saw the premiere of a new experiment developed in partnership with Dr. Matt Killingsworth, a US-based psychologist and scientist who studies human happiness. The experiment – called Can Joy Improve Performance? – showed how golfers could boost the accuracy of their shots when positively rather than negatively primed by their coach. 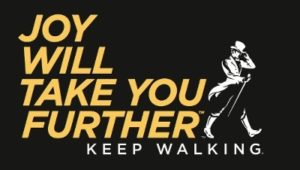 Commenting on the experiment Dr. Killingsworth said: “What this experiment shows us – albeit with a limited sample size – is that having a joyful perspective on the task at hand can actually boost our performance.”

Cox added: “Johnnie Walker has been a progressive and innovative brand since it was founded by John Walker in 1820. Our journey from Scotland to the four corners of the world has shown us that finding happiness along the way can help us reach our goals. Dr. Killingsworth’s experiment is just one example of the increasing evidence that supports our belief that Joy Will Take You Further. We remind everyone who enjoys Johnnie Walker around the world to always do so responsibly.”

The Joy Will Take You Further global marketing campaign will be activated in more than 50 countries and will reach nearly 270 million consumers around the world within the first weeks of launch.

Joy Scales New Heights for Johnnie Walker at the Explorers Club added by Newsroom on October 1, 2015
View all posts by Newsroom →