By Newsroom on November 24, 2014Comments Off on Kellogg Company Throws Down Instagram Challenges

Teens can participate in 21 interactive challenges, competing against their friends, influential teens in the arenas of surf, skate and dance, as well as the Nutri-Grain Ironmen and Ironwomen by ‘throwing down’ video and photo challenges to score awesome prizes.

Fulfilling Nutri-Grain’s brand purpose to fuel an unstoppable life, Throwdowns is a combination of physical and creative challenges that inspires participants to get active and get involved with their mates.

Jeci David, senior brand manager for Nutri-Grain at Kellogg, said: “We wanted to challenge teens and really tap into their creativity with Nutri-Grain Throwdowns. The smartphone is the one device teens always have on them, so Throwdowns has been hugely successful in building engagement on Instagram – a channel where they’re already highly active.” 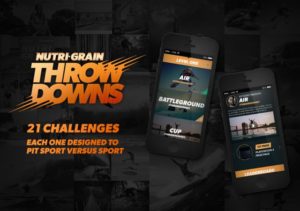 Gamers progress through Throwdowns by unlocking new levels and scoring ‘likes’ to complete challenges as they compete to win daily prizes, culminating with one overall winner taking home a Jeep Patriot.

Aden Hepburn, VML’s managing director and executive creative director, said: “Throwdowns is a great opportunity for us to connect with teens in a new way, doing the things they love, on a device they never let go of, powered by the Nutri-Grain brand. All while generating a tonne of bite-sized social content for the brand.”

Nutri-Grain Throwdowns is currently sitting at #10 on the Apple App Store in its category with thousands of downloads, and more than 100,000 likes on entries to-date and an estimate 2.5 million branded impressions from content created through the app.

The campaign runs until midnight on November 25th, with participants playing for a piece of the huge prize pool.

This campaign has been created in collaboration with JWT, Mindshare, Loop Brands and Liquid Ideas.

Kellogg Company Throws Down Instagram Challenges added by Newsroom on November 24, 2014
View all posts by Newsroom →