By Newsroom on July 9, 2014Comments Off on Kellogg’s Recharge Bar Served up Extraordinary Mornings to Thousands of Consumers 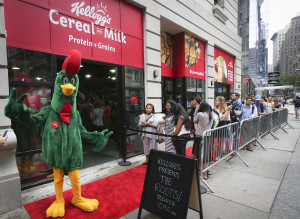 When it comes to nutrition at breakfast, there’s a lot of information out there. In a recent survey, Kellogg’s found that while families love the combination of cereal and milk (93 percent eat it regularly), few realize what a nutritious morning meal it can make.

Which is why, last week Kellogg’s launched the Recharge Bar in New York City to help educate families on the importance of starting the day with a serving of Kellogg’s cereal and one cup of skim milk to give your body protein and grains to help rebuild and recharge.

The Recharge Bar, which was open June, 24-27, was a unique experience for consumers, to help them start the day in an extraordinary way. That included a surprise performance by Emmy-award winning choreographer, Derek Hough. After having a bowl of Kellogg’s Raisin Bran and milk, Hough put his energy into action and revealed the cereal and milk dance move at the Recharge Bar.

More than 4,000 people were in attendance to help rebuild and recharge with protein and grains and got to experience the following throughout the week:

Powerful Combinations from celebrity chef, founder and owner of Milk Bar, Christina Tosi – Tosi partnered with Kellogg’s to create a variety of classic and unique Kellogg’s cereal and milk combinations to help people recharge right with a delicious free breakfast. The most popular recipes ordered by attendees included:

Nutritional advice and counsel from Emmy-award nominated physician Dr. Travis Stork – Stork helped families on-site learn about protein and whole grains. Knowing that only 25 percent of Americans believe that cereal and milk has protein and only 20 percent actually think of cereal and milk when they hear “protein and grains,” Stork made it his mission to clear up any confusion.

The fun continued with a one-of-a kind, cereal-and-milk-inspired performance by The Roots – The band made a surprise appearance inspired by the Kellogg’s Cereal and Milk song. The performance tapped into The Roots’ unique style, by using cereal and milk inspired instruments.

Kellogg’s Recharge Bar Served up Extraordinary Mornings to Thousands of Consumers added by Newsroom on July 9, 2014
View all posts by Newsroom →