By Newsroom on November 21, 2017Comments Off on KFC Christmas Campaign Celebrates Sharing with One-Take Bucket Performance 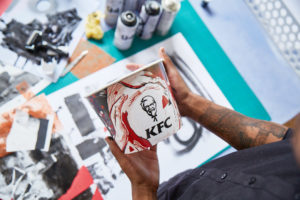 Firstly, there’s not even one strand of tinsel. No baubles. And no Santa Claus. There’s not really a set. The ad is shot in a gym. The ad is a dance. A simple step dance that celebrates the idea that “those who roll together, feast together”.

It’s a campaign about sharing – the central element of Christmas – executed in an unusual yet authentic way. In the TVC, directed by Jake Schreier, Sam Cooke’s classic Good Times is performed with a distinctly modern twist.

Six artists were recruited to sing, dance and play a step dance group version of the track – with the KFC bucket playing a central role as the only instrument available for the artists to play. 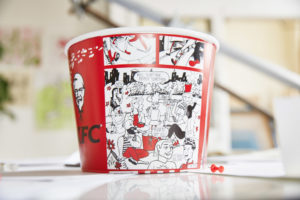 Chris Gallery, partner at Mother, explained, “We’ve chosen to shoot a simple, paired back execution as this story doesn’t need additional layers of complication to be heard. It’s something that we’ll all want this Christmas – to catch up with friends and family and feast.”

The staging and performance are designed to allow the true emotion to shine through, uninterrupted by the filming – with the entire performance captured in one take.

The artists – Kayla, Nathalie, Lara, Andrea, Odilia and Nicey – who team up to form the ultimate KFC Bucket song group, were chosen from step dance groups from across the UK. 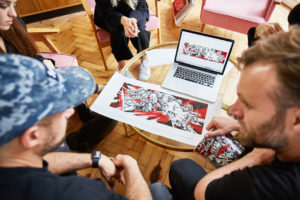 To spread the roll together, feast together message, activations across radio, outdoor, social media, in-restaurant, editorial and TV will be launched in the coming weeks.

KFC has also commissioned five artist collectives to design limited-edition buckets around the roll together, feast together theme. The buckets will be available in KFC restaurants across the UK, and are a celebration of the different types of modern ‘families’ that Christmas brings together.

These artist groups come from a range of creative backgrounds from across the UK.

Jack Foley, senior brand manager at KFC UK & Ireland, commented, “This campaign captures the spirit of a modern British Christmas. Putting the KFC bucket at the heart of it showcases what KFC does best – bringing people together to feast.”

Chris Gallery, partner at Mother, added, “We’ve chosen to shoot a simple, paired back execution as this story doesn’t need additional layers of complication to be heard. It’s something that we’ll all want this Christmas – to catch up with friends and family and feast.”