By Newsroom on January 15, 2018Comments Off on KFC Introduces Colonel Sanders to France in New Campaign by Sid Lee Paris

Colonel Sanders has landed in France with a new campaign for KFC. Truly, the Colonel was already in the country, with the chicken chain having opened its first restaurant there back in 1991, but 26 years later, only 3% of French people know who he is. 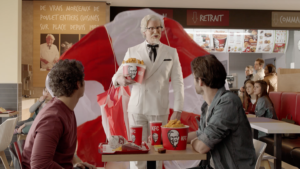 For over a quarter of a century his trademark face has appeared on buckets but has never been a part of the brand’s communication in France. Until now.

KFC, along with agency Sid Lee Paris, are building his story, launching a new communication platform to kick off the year. The campaign begins with a 90-second film which aired in prime time, introducing the character to the population for the first time.

The film follows the Colonel who, after overhearing two young French guys chatting indifferently about his chicken, embarks on a journey from Kentucky to the Gallic country, pushing a young bucket of chicken on a swing set, performing stunts on a motorcycle and riding a couple of crocodiles in a river in the process. 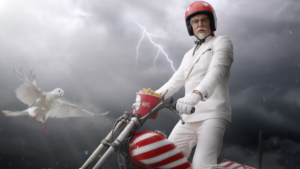 Intent on introducing himself, he’s prepared to confront any challenge to explain that his is no ordinary bucket of chicken, that his secret blend of 11 herbs and spices took him over 40 years to perfect (in a remarkably strong American accent of course, lest we forget his origins).

The actor playing the French Colonel isn’t a celebrity, as are featured in many of the US spots.

“Our hope is to make Colonel Sanders a real pop-culture personality in France. It’s an incredible opportunity to be able to tell the story of such a persona,” said Céline and Clément Mornet-Landa, creative directors at Sid Lee Paris. 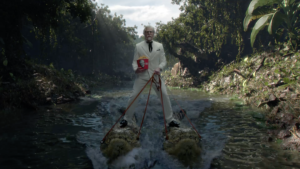 “Our feeling is that the product needs to be at the heart of the discussion. Behind the history of Colonel Sanders, there’s the history of the recipe that we’ve always wanted to share with the French people,” said Mehdi Benali, managing director at Sid Lee Paris.

The orchestration the Colonel’s intro to France featured an outdoor campaign to announce his arrival, a Twitter activation that posted a tweet every minute for the hour leading up to the film’s launch, an interview with pop-culture site Konbini, and even internally with a number of KFC employees being treated to an exclusive in-person introduction to the Colonel, who delivered a keynote speech. 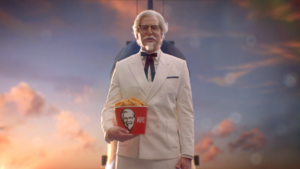 The launch of Colonel Sanders is only the first chapter in a new history for the brand, a story that will continue throughout the year.

“More than an ad campaign, our objective is to put forth a genuine storytelling about Colonel Sanders and his recipe. And to set it up through a privileged exchange between the brand and French people” explained Pascale Laborde, marketing director, KFC France.

KFC Introduces Colonel Sanders to France in New Campaign by Sid Lee Paris added by Newsroom on January 15, 2018
View all posts by Newsroom →