By Newsroom on June 18, 2018Comments Off on KFC Makes a Meal Out of their New TV Ad by Ogilvy Cape Town

The insight comes from the fact that soccer players often take a dive for a free kick or to get the opposing player a card. Just click to that little event happening in Russia to see a few examples.

But in the KFC Streetwise two commercial, the player makes a meal of it on the pitch… to make a meal of it at KFC, with two pieces of chicken and chips. 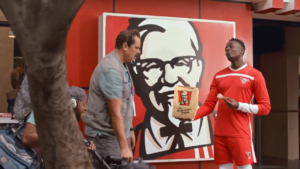 Created by Ogilvy Cape Town and directed by Karien Cherry from Giant Films, the ad titled “Keep Rolling” follows the journey of a football player, Herbz, who decided to make a meal out of a challenge.

His over-the-top acting of flipping and flopping around the field confused not just the players and managers, but also the medics, as he decided to roll out of the field.

Through town. Across townships. Over bridges and a zebra crossings… all the way to a KFC, to make a meal of the KFC Streetwise two deal.

KFC Makes a Meal Out of their New TV Ad by Ogilvy Cape Town added by Newsroom on June 18, 2018
View all posts by Newsroom →