By Newsroom on November 12, 2018Comments Off on KFC’s Colonel Gets a Dance Partner to Hawk Chicken and Waffles in New Campaign

KFC is promoting Kentucky Fried Chicken & Waffles with a TV spot breaking Sunday that spoofs the famous dance scene from the end of “Dirty Dancing.”

The roles of Johnny (Patrick Swayze) and Baby (Jennifer Grey) are portrayed by Col. Sanders and Mrs. Butterworth of Mrs. Butterworth’s syrup, which is now owned by ConAgra Brands. The dance moves aren’t on par with the original, in part because a bottle of syrup doesn’t have legs. 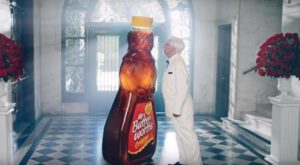 And in a departure from most of KFC’s recent campaigns, Col. Sanders isn’t portrayed by a well-known celebrity. Actor Craig Fleming fills the role in this spot, with a voiceover that declares the limited-time pairing “the most delicious union of all time.”

The campaign is the latest KFC work from Wieden & Kennedy Portland.

KFC says it went through 15 different variations of waffles before deciding on Belgian Liege-style waffles, which are made with a yeast-raised dough instead of batter and include pearl sugar imported from Belgium. The waffles are sweeter and doughier than American-style waffles, KFC U.S. Head Chef Bob Das said in a statement.

KFC’s Colonel Gets a Dance Partner to Hawk Chicken and Waffles in New Campaign added by Newsroom on November 12, 2018
View all posts by Newsroom →