By Newsroom on June 16, 2014Comments Off on KitKat All Aboard For Japan Railway Recovery

Train travellers in northern Japan can use KitKat as train tickets as part of a pioneering scheme to rejuvenate tourism in a part of the country devastated by the earthquake and tsunami three years ago.

It is the first time a Japanese rail company has allowed chocolate bar packaging to be used as a valid travel pass.

People using the Sanriku Railway network – now up and running again after three years of reconstruction work – can buy the special packs of KitKat at a lower price than a standard ticket.

The KitKat train ticket is the latest in a series of steps taken by the brand to support the Sanriku Railway in its reconstruction efforts.

A symbol of support 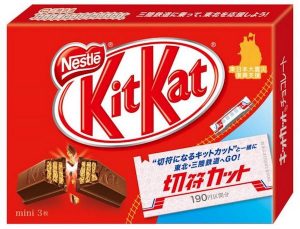 In Japan, it is common for people to give KitKat to each other as a message of good luck, because the brand’s name is similar to the Japanese phrase “Kitto-Katsu”, which translates as “you will surely win”.

In 2011, after the tsunami destroyed large areas of the Sanriku region including the railway network, Nestlé discovered that the reconstruction team working on the railway had received KitKat products as a form of encouragement.

KitKat then started working with the Sanriku railway, donating 20 yen per bar to the rebuilding project.

KitKat train tickets launch in Japan this month and will be valid on trains until May 2015.

KitKat All Aboard For Japan Railway Recovery added by Newsroom on June 16, 2014
View all posts by Newsroom →