By Newsroom on April 15, 2013Comments Off on Kool-Aid Launches Expansive Brand Campaign

Kool-Aid, the iconic refreshment beverage that has stood for fun and flavor for generations, unveiled a comprehensive brand campaign called “Smile.

It’s Kool-Aid,” which introduces a new look and feel for the brand and a makeover for its famous spokespitcher, Kool-Aid Man, all timed to the product launch of Kool-Aid Liquid Drink Mix.

Kool-Aid Man, who has been the embodiment of the brand since he first appeared in an advertisement in 1954, has undergone a serious makeover with a brand new modern look and distinctive voice.

Kool-Aid Man has gone back to his roots for his updated look, with an emphasis on his original pitcher-focused personification but playing up his undeniably fun personality. 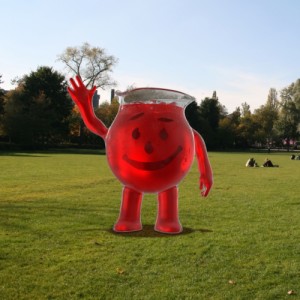 Previously a costumed character, the new lifelike Kool-Aid Man is technologically advanced, CGI-generated and more interactive and colorful than ever.

In addition to his iconic tagline “Oh Yeah!” he will now have his own characteristic sound, expanded vocabulary and developed personality. And like any digitally-savvy celebrity, Kool-Aid Man will have his own personal Facebook page, launching on April 15, where he will interact directly with fans like never before.

The print and television campaigns, geared toward moms, offers insight into Kool-Aid Man’s personality and a first glimpse into his daily life: trying to decide which of his 22 flavor “outfits” to wear, working out at the gym, buying flowers and interacting with neighbors, and of course, breaking through walls.

“This is one of those fun projects we love to work on: Bring Kool-Aid Man back, better than ever,” said Saatchi & Saatchi NY Chief Creative Officer Con Williamson.

“When we set out to do that, when we really dug in, we discovered that there’s a lot to love in the evolution of this iconic character. We wanted people to get to know him a bit more. Kool-Aid and Kool-Aid Man are undeniably fun and positively bold. We wanted that happiness to shine through in his personality and attitude.”

In June, for the first time ever, Kool-Aid will launch a new Android- and iOS-enabled Kool-Aid Man PhotoBomb mobile app, which will enable fans to superimpose different images of Kool-Aid Man into their personal photos.

PhotoBomb users can move, scale and manipulate images to allow Kool-Aid Man to integrate seamlessly into any photo opportunity. All photos will be shareable across all popular social media platforms (Facebook, Twitter and Instagram).

The newly revamped Kool-Aid website will offer fans a chance to navigate Kool-Aid Man’s home, clicking through interactive portals that will link to various brand assets. The website, app and Facebook page are being developed by VSA Partners of Chicago.