By Newsroom on July 18, 2016Comments Off on Lay’s Debuts Four Timely Global Flavours To Store Shelves in the US 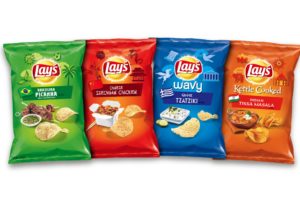 As the world comes together this summer for the 2016 Olympic Games, the Lay’s brand is bringing four popular international flavours stateside to celebrate the spirit of cultural discovery and adventure through flavours.

According to a recent Mintel study, three out of five people feel they have become more adventurous when it comes to trying ethnic cuisines. Lay’s, one of the marquee brands from PepsiCo’s Frito-Lay division, is putting this to the test by bringing some of the top flavours from around the world – Brazilian Picanha, Chinese Szechuan Chicken, Greek Tzatziki and Indian Tikka Masala – to chip form.

“This summer, all eyes will be on the global stage, reminding us of our desire to travel and explore the world. While most of us can’t just hop on a plane, all of us can travel through our taste buds,” said Jeannie Cho, vice president of Frito-Lay marketing. “The Passport to Flavour program invites consumers to try four delicious new global flavours, while also giving them a chance to win a variety a different trips and travel-related prizes.”

A Flavour for Every Type of Traveler

Fans can find all four international flavours in retail stores nationwide in the US beginning July 25.

Lay’s Debuts Four Timely Global Flavours To Store Shelves in the US added by Newsroom on July 18, 2016
View all posts by Newsroom →