By Newsroom on October 31, 2016Comments Off on Lyle’s Golden Syrup Returns to UK TV for the First Time in 25 Years

Lyle’s wants to attract a new generation of foodies and bakers as it launches it first TV campaign in 25 years.

The £1.8m campaign, set to air on October 31, introduces the brand’s new tagline ‘Sticky But Worth It’. 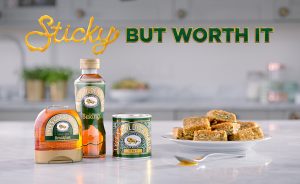 The TV ad, created by Iris Worldwide, sees a woman getting in a sticky mess with Lyle’s Golden Syrup as she makes numerous bakes, including gingerbread men, syrup sponge and flapjacks. It then shows her on a video call with her daughter while tucking into a golden flapjack. According to the brand, the refreshed creative takes it into the 21st century, while “retaining the same charm loved by generations”.

The new campaign will run across TV, VOD, digital and social media, and include press advertising, in-store and PR activity.

In addition to the new ad campaign, Lyle’s has signed a deal with Channel 4. From the first weekend of November, a series of short clips will air on weekend mornings. Coupled with the TV advertising schedule, these are set to be seen by more than 75% of primary household shoppers with children.

The brand’s European marketing director Tamas Fuzer said the new campaign aims to remind consumers about it being a “kitchen cupboard staple” used for a wide variety of dishes, as well as appeal to a new generation of users. 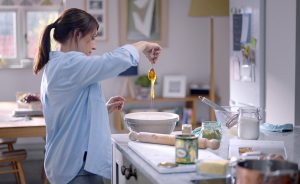 “The love for the brand has been passed on between generations, but cooking habits are changing. There is a danger as being seen as nostalgic but less relevant to the younger generation,” he said.

With Lyle’s new campaign and tagline ‘Sticky But Worth It’, the brand says it is “looking to be brave” and address inconvenient aspects around the brand head on.

“The key thing is that we’re not shying away from the fact that some features are based around inconvenience; it’s not that easy to handle this tin. It can be really sticky. We wanted to play with that, and see the fun side of the product’s history,” he explained.

Sara Harrison, head of Lyle’s Golden Syrup brand, added: “At the end of the day, we still have squeezy bottles and other formats that solve this problem. But everyone can still relate to this campaign. And we think a relatable ad is a memorable one. We don’t want to be seen as different, we want to be a bit more forward-looking in terms of trying to bring in the new generations of foodies and bakers so they start experiencing the product.”

Lyle’s Golden Syrup Returns to UK TV for the First Time in 25 Years added by Newsroom on October 31, 2016
View all posts by Newsroom →