By Newsroom on April 24, 2013Comments Off on Magnum Pleasure Hunt 3: Five Lost Kisses

In the latest version, The Prince, the apple of our heroine’s eye, suddenly becomes the target for a bunch of evil willing bad girls. He gets brutally kidnapped and your objective is to help rescue him and bring him back for The Kiss. 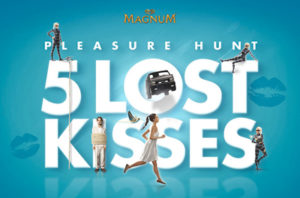 In addition to previous games in the series the games are heart filled homages to the joyful world of old school gaming, playing with established on-line conventions and trends.

Additionally the developers added an extra dimension of thrilling rooftop racing over Paris that is specifically built for instant pleasure on your handheld device, no login, no app, no hazel, just go to the site and start playing.

“It has been a true bliss to produce this year’s Pleasure Hunt, taking us on an exploration through film, games, illustration, composition and animation, allowing us develop a dynamic experience for multiple platforms and devices. This is really taking the Pleasure Hunt saga one step further and another step into the future,” said B-Reel.