By Newsroom on November 1, 2016Comments Off on Mallow & Marsh Now Available in Starbucks 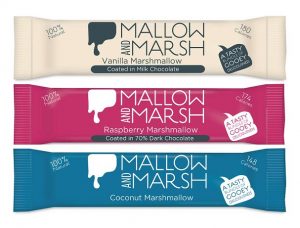 Mallow & Marsh, the fastest-growing marshmallow brand in the UK, has announced it will be available in over 800 Starbucks branches nationwide and will be promoted on the coffee chains own app.

The new stockist cements Mallow & Marsh as the fastest-growing marshmallow brand in the UK shaking up the sweet treat category through putting good marshmallows on the map. Already available in Sainsbury’s, Wholefoods, Booths and BP Simply Food, the natural, gluten-free, low-calorie marshmallow bars is a leading innovator for the chocolate bar shelf.

Mallow & Marsh has identified a key area for growth, with research showing that “30% of consumers who buy sweets on impulse do so because it’s a new type of snack they haven’t tried before” and “51% of those who buy sweets would like to see sweets targeted at adults”. With a range of exciting NPD and flavour varietals in the pipeline, Mallow & Marsh are securing their position as an exciting player in the UK’s confectionery business, which was last year predicted to grow 8.6% by 2019.

The light, melt-in-your-mouth marshmallows are available in three flavours: Coconut (dusted in coconut shavings), Vanilla (covered in milk chocolate) and Raspberry (covered in 70% dark chocolate), with each one coming in at under 150 calories.

Using high-quality ingredients, Mallow & Marsh bars are 100% natural, with no additives or preservatives. Their unique take on the traditional marshmallow recipe is carefully hand-made over four-days.

Last year, Mallow & Marsh were proud to win the “Virgin Start Up Foodpreneur Retail Winner” and the Café Quality Food & Drink Awards – Sweet Treats Winner (for the Raspberry bar). Judges’ comments included “Real flavour and a great mix of textures. Good innovation as this is new in the market and quite unique”.

Harriot Pleydell-Bouverie, Founder of Mallow & Marsh says, “It’s really fun to be the treat shaking up the traditional confectionary shelf. Our bars are the sweet treat for those in the know. Launching in Starbucks cements our position as a grab and go offering that is more than just a sweet the bars are an experience. We look forward to taking our bars out to a new audience and hope that the Starbucks fans love them as much as we do.”

Mallow & Marsh Now Available in Starbucks added by Newsroom on November 1, 2016
View all posts by Newsroom →