By Newsroom on August 1, 2013Comments Off on Manchester United & PepsiCo Form Partnership In Seven Countries In Asia 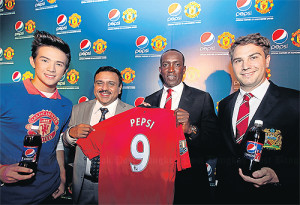 Manchester United enjoys a combined fan base of more than 38 million consumers in these seven countries. Connecting this fan base to PepsiCo’s strong portfolio of brands is expected to unlock new growth opportunities and further increase the reach and popularity of the Manchester United and Pepsi brands in the region.

Pepsi has a long and successful heritage in Football marketing, leveraging it as a platform to connect with consumers in relevant and engaging ways. Football is the number one sport in South East Asia and Manchester United, the number one club, has a strong ‘home’ in this region. 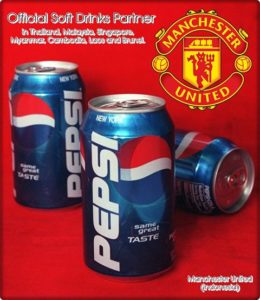 Throughout Manchester United’s 135 year heritage it has grown to become the most recognisable and biggest sports brand in the world, winning 61 trophies and boasting a global fan base of 659 million followers.

‘Manchester United and Pepsi are two iconic brands and the Club is delighted to be teaming up with PepsiCo as our Official Soft Drinks partner in these seven territories in Asia.

Our huge following in this region and the strong popularity of both brands within Asia-Pacific can only benefit our fans. PepsiCo understands what our fans love and through our partnership will be bringing them exciting promotions and incentives getting them closer to the Club they support.

PepsiCo is an ideal partner for Manchester United because of its unique understanding of sports and inventive marketing initiatives. We’re excited to team up with PepsiCo during this important time in our history and welcome this world-class company as one of our partners.’

Sports represent a huge global platform for PepsiCo, and we’re delighted to be teaming up with Manchester United in Asia Pacific. The combination of Manchester United’s stature as one of the world’s most iconic sports franchises and PepsiCo’s portfolio of beloved brands will create exciting new opportunities for consumers throughout the region. The partnership brings to life Pepsi’s “Live for Now” positioning, which was launched in Asia Pacific in January this year. Working with the biggest names in sports and entertainment, we look forward to enabling consumers to celebrate their passion for Pepsi and Manchester United.

Manchester United & PepsiCo Form Partnership In Seven Countries In Asia added by Newsroom on August 1, 2013
View all posts by Newsroom →