By Newsroom on June 10, 2016Comments Off on Marcel Desailly Rewards Probably the Most Dedicated Football Fans

On the eve of the tournament, Carlsberg’s quest to make Uefa Euro 2016 a ‘tournament for the people’ continued as they rewarded fans willing go above and beyond to show their love for the game with tickets to the Final.

As the official Beer of Uefa Euro 2016, Carlsberg teamed up with former France defender and winner of Uefa Euro 2000 Marcel Desailly, leader of their football revolution to surprise five fans who had persevered through a series of challenges to collect a golden ball, and so win tickets to the tournament finale at the Stade de France. 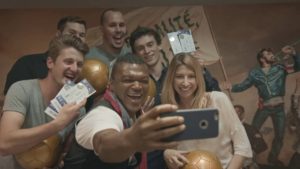 In the film, created by Happiness Brussels and produced by Adult, fans were invited to follow a French Revolutionary, bearing a flag saying: ‘Follow me to win tickets to Euro 2016.’ With no idea what was in store, where they would go or how long it would take to get their reward, the crowd grew to around 100 people as they marched on through the streets of Belgium.

Over three and a half hours, the march moved from the city centre, out to the suburbs, with fans required to walk through smoke filled tunnels, parks and woodlands, over football pitches and through ditches.

As the obstacles become tougher only the most dedicated football fans stayed the course and they were promptly whisked to Paris where they were surprised to receive their ticket to the Final from Marcel Desailly.

Richard Whitty, Senior Marketing Manager Football at Carlsberg, said: “Carlsberg’s fan revolution marches on. This Uefa Euro Carlsberg is giving away more tickets than ever before and around the world we’ve surprised deserving fans with tickets to Euro matches on metros, buses and city streets. We were looking for fans who really showed their commitment to get tickets to the Final, and I think we found them with this stunt.”

Marcel Desailly Rewards Probably the Most Dedicated Football Fans added by Newsroom on June 10, 2016
View all posts by Newsroom →