By Newsroom on July 10, 2013Comments Off on Mariachi Doritos Set to Perform at Yahoo! Wireless Festival

This summer, the nation’s favourite mariachi band will perform their biggest gig to date…  On the main stage at this year’s Yahoo! Wireless Festival.

Doritos has formed an exciting new partnership with Live Nation that will see the companies work together to bring the party to the party at this summer’s essential open-air music experience – Yahoo! Wireless. 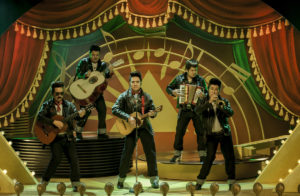 The announcement comes as Doritos launches its summer campaign, which sees Mariachi Doritos put their iconic Mexican stamp on the party anthem, I Love Rock ‘N’ Roll, in a flavoursome new TV advert.

The gigantic jukebox featured in the ad will also be landing in Queen Elizabeth Olympic Park to form part of an exclusive Doritos experience. Here, fans can select and cue up the next song, then watch performances from the one and only Mariachi band live inside their very own jukebox.

Mariachi Doritos will also be rocking the main stage on Sunday 14th July alongside some of the world’s biggest music artists in a unique partnership.

What’s more, in the lead-up to the event, Doritos is asking fans to help get involved with the Mariachi’s performance by choosing a new track for them to add their renowned Mexican twist to.

Music fans can simply tweet their preferred track name with the supporting hashtag, #DoritosJukebox, to submit their request and those fans will automatically be entered into a ballot to win Yahoo! Wireless Festival tickets.

Mariachi Doritos Set to Perform at Yahoo! Wireless Festival added by Newsroom on July 10, 2013
View all posts by Newsroom →