By Newsroom on February 16, 2016Comments Off on MasterFoods Says ‘Make Dinner Time Matter’ in New Campaign

Mars Food Australia has launched its new brand campaign via Clemenger BBDO Sydney, for MasterFoods encouraging all Aussies to #MakeDinnertimeMatter.

With the demands of modern life and workloads continuing to increase, the campaign acts as a timely reminder that dinner is more than just a meal, it’s a chance to connect with the people who matter most in all our lives.

The Let’s Make Dinnertime Matter campaign is in response to research revealing that while Australians recognise the benefits of dinnertime, with 78% saying they get more connection from sharing a meal with loved ones than any other activity, three quarters want to change something about their dinners.

To move Aussies to prioritise and celebrate dinnertime, MasterFoods toured the country asking people who their ideal dinner guest would be. It asked parents and then their children the same question. What was revealed surprised everyone. To watch what happened click here.

Complementing the online film, OOH and print also celebrates the role of dinnertime. The advertisements feature real Australian families and friends connecting over dinner and social posts will remind people to prioritise dinnertime at key points during the day.

To get a deeper understanding of how food enjoyed in company contributes to our emotional wellbeing, Mars Food Australia launched a research report – Lifting the Lid on Dinnertime – investigating the dinnertime habits of Australians.

The report reveals the importance placed on the social role of dinnertime in Australia with people telling us that what goes on over the plate (emotional factors) is often more important than what’s on it (the food) or around it (the setting). For example, ‘no arguments’ was the most essential ingredient for a home cooked meal (38% of respondents said it was essential) and this was followed by time together without stress (37%) and then nutritious food (33%). 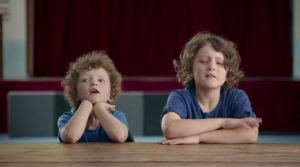 Says Tim Hicks, marketing director, Mars Australia: “We know that food can connect us with our loved ones physically, socially and emotionally – we make healthier choices about what we eat, we have real conversations and we grow closer to those that matter most to us as a result. Most of us eat dinner each night, but how many of us prioritise dinner to make it really matter?

“As a brand in over 80% of Australian homes, we have a responsibility with MasterFoods to start a movement and make a real change to shape the future of Australia for the better. This new brand work is testament to the amazing partnership we have with Clemenger BBDO Sydney and our commitment to move all Aussies to prioritise and celebrate dinnertime.”

Says Paul Nagy, ECD, Clemenger BBDO: “You know you’re doing something right when your own ad changes your own behaviour, and since working on the Let’s make dinnertime matter campaign for MasterFoods, my wife, my three beautiful daughters and I spend mealtimes together a hell of a lot more. Playing off arguably the greatest dinnertime conversation starter in the history of mankind, it’s such a simple idea that delivers a really powerful message, and I truly hope every Australian family has a good think about it. It’s obvious really, but that special time over dinner is far more entertaining, inspiring and rewarding than any of the million distractions we let get in the way. (While you’re at it throw some MasterFoods lemon pepper on your steak before you barbecue… I’m obsessed.)”