McCoy’s Kicks Off the Season with Nationwide Wholesale Promotion

By Newsroom on August 28, 2015Comments Off on McCoy’s Kicks Off the Season with Nationwide Wholesale Promotion 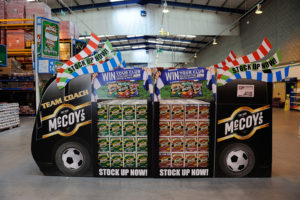 The Official Crisp Partner of the Football League, McCoy’s, is amplifying its national ‘Win Your Club’ activity with bespoke promotions and displays in wholesale depots across the UK.

Featuring in over 80 Bestway and Dhamecha depots throughout August, the dynamic football-coach-themed displays will educate retailers on the McCoy’s promotion as well as offering exclusive ‘two for £21’ case offers.

Matt Collins, Trading Controller Convenience at KP Snacks, commented: “This promotion has been well received by the trade – it really brings the depots alive with its dynamic look. Depot managers are optimistic this will increase awareness and provide an uplift in sales, just like similar McCoy’s campaigns have in the past. As well as this wholesale-specific activity, we are also offering convenience and independent retailers stand-out units and unique point of sale kits including shelf barkers, till screen surrounds and FSDUs, so they can take advantage of this huge activation in their own stores.”

McCoy’s ‘Win Your Club’ on-pack activation will be running until November 2015 across select grab bag and multipack SKUs.

The promotion offers an array of ‘money-can’t-buy’ prizes, including a ‘Win Your Club’ ultimate package which gives entrants behind the scenes access, the chance to meet the team and front the media, plus much much more. Fans will also be able to get their hands on thousands of free tickets and branded merchandise such as football scarves.

McCoy’s Kicks Off the Season with Nationwide Wholesale Promotion added by Newsroom on August 28, 2015
View all posts by Newsroom →