By Newsroom on July 25, 2014Comments Off on McDonald’s Celebrates 40 years in the UK with Ad Showing ‘What Matters’

McDonald’s UK is tonight launching the first ad in its ‘Here’s to What Matters’ campaign, focusing on its charity work.

The first ad, “dad’s voice” airs July 25 and focuses on  McDonald’s support of the Ronald McDonald House Charities, which provide accommodation near hospitals that allow parents to stay close to their sick kids.

The 60-second spot was created by Leo Burnett London, which has also created print, digital PR and social media executions as part of the campaign, which coincides with fast food giant’s 40th anniversary since launching in the UK. 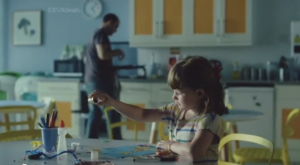 The work was written by Jon Fox, art directed by Rik Brown and directed by Joshua Neale through Smuggler.

Alistair Macrow, McDonald’s UK’s senior vice president and chief marketing officer said: “‘Here’s to what matters’ marks a significant step change – not in what we do, but in how we talk about what we do.

“Our customers don’t always think about why we do things … like giving out children’s books in Happy Meals or sourcing our ingredients from British and Irish farmers.

“So we’re going to bring together all these individual actions into a joined-up campaign to help people understand the bigger picture – what McDonald’s is all about and show the difference that we make to people’s lives.”

McDonald’s Celebrates 40 years in the UK with Ad Showing ‘What Matters’ added by Newsroom on July 25, 2014
View all posts by Newsroom →