By Newsroom on April 25, 2018Comments Off on McDonald’s Is Celebrating Its 30th Anniversary in Hungary With Billboards of Its Most Iconic Products 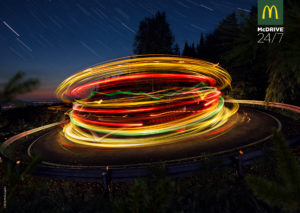 use of clever out-of-home work to draw hungry drivers to the chain is well-documented. The fast-food chain is looking to do just that—while also celebrating its 30-year anniversary in Hungary—with a simple new campaign from DDB in Budapest.

Using just two billboards featuring images of McDonald’s two most iconic products and placing them on the busiest motorways and roads en route to the fast-food chain locations is “perfect for driving traffic” to the restaurants, according to DDB Budapest’s creative director Karolina Galácz. 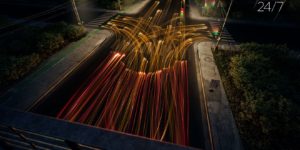 work features an illustration, by image production studio Gravy, of an imagined long-exposure photograph “where the lights of the cars on the road together make up the icon of a burger and a pack of fries,” according to the campaign description.

“We celebrate these products during the whole year in Hungary because this is the 30th anniversary of McDonald’s here (the first one opened in Budapest in 1988),” explained Galácz.

McDonald’s Is Celebrating Its 30th Anniversary in Hungary With Billboards of Its Most Iconic Products added by Newsroom on April 25, 2018
View all posts by Newsroom →