By Newsroom on February 7, 2014Comments Off on McDonald’s Sochi Website Hijacked by Gay Activist to Protest Sponsorship 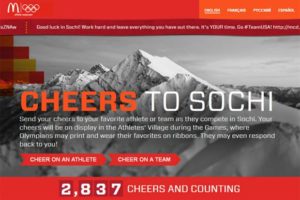 Scott Wooledge, an LGBT activist, has launched a parody version of McDonald’s Cheers to Sochi website in frustration of the Olympic sponsors not condemning Russia’s anti-gay laws.

The website is hosted at cheerstosochi.org and has a near identical web address to the McDonald’s website URL and aims to act as a resource for people to confront the Sochi Olympic sponsors about their concern for LGBT rights in Russia.

Wooledge said: “Activists around the globe have demonstrated loudly in the streets of New York City, London, Berlin and elsewhere.

“#CheersToSochi speaks to frustrated people around the world who are disgusted with the sponsors’ silence. Their silence, and tacit consent with Russia’s war on gays has damaged their brand images worldwide.”

Visitors to the site are encouraged to create meme’s using images of the sponsor’s brand mascots or gay people who have been beaten up in homophobic attacks, and share it using McDonald’s #CheerstoSochi hashtag.

The parody site claims it has received almost 30,000 “cheers to Sochi”, while the official McDonald’s sites has fewer than 3,000.

McDonald’s Sochi Website Hijacked by Gay Activist to Protest Sponsorship added by Newsroom on February 7, 2014
View all posts by Newsroom →