Miller Lite Surprising Fans with Unexpected Activations Across the US

By Newsroom on August 4, 2016Comments Off on Miller Lite Surprising Fans with Unexpected Activations Across the US 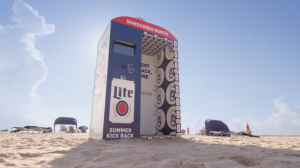 Summer is better with perks. To take advantage of that, Miller Lite is spending these sun-soaked months offering “kick backs”—a fun series of unexpected rewards—to people across the country. Who says service is dead?

Because each kickback is so different, the best thing to do is run through them, and Miller Lite’s done us the service of encapsulating a handful in a series of videos. Get in the zone with this roundup video from DigitasLBi, which sums various perks up at whiplash speed:

Now onto the fun stuff. We’ll start Lite: To provide “fresh perspective” to people lounging face-up on the beach, Miller Lite took to the skies and dispensed advice to improve their loungey day—ensuring they could spend it without sunburn, lukewarm beer or communal thirst.

Can’t be bothered to slather on another layer of sunscreen? In another video, “We Got Your Back,” Miller Lite erected a booth in Florida that sprays some on you in a shower you’ll definitely want to close your eyes for. It used over 90 gallons of the stuff in a day.

And in its last video, Miller Lite hit up Bonnaroo to throw some much-needed shade over festival goers.

In addition to all these charmed efforts to keep the nation’s sunrats from developing skin cancer, Miller Lite did other stuff, too, like take an entire Southside Chicago bar to a White Sox Game, and set up giant Jengas.

Summer’s only half over, so grab a towel and keep your eyes on the sky. To keep track of where Miller Lite may strike next, or shoot them a hint in your direction, follow the #ItsMillerTime hashtag.

Miller Lite Surprising Fans with Unexpected Activations Across the US added by Newsroom on August 4, 2016
View all posts by Newsroom →