By Newsroom on February 8, 2018Comments Off on MillerCoors Unveil their New Line of Light Beers, Two Hats in the US 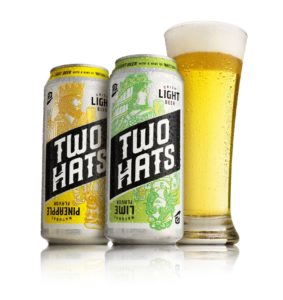 Two Hats, a new line of light beers with a hint of all-natural fruit flavour, is changing up the light beer game with two lightly flavoured options, lime and pineapple, that won’t break the bank. More than 20 years since there has been a mainstream beer launch at a low price point, Two Hats is introducing a good, cheap option that suits the taste and budget of a new generation of drinkers who aren’t currently big on beer.

With an alcohol by volume of 4.2 percent, the MillerCoors-owned brand merges the refreshing character of a light beer with a familiar hint of all-natural fruit flavour that never overpowers. Drinkers can pick up 16-ounce Two Hats cans in a four- or six-pack for about five dollars US-wide.

“We want to give 21- to 24-year-old drinkers, who don’t consider beer to be great-tasting and affordable, an option they can get on board with,” said Justine Stauffer, Two Hats brand manager. “As soon as people realise that a beer this good is about five dollars, their immediate reaction is, ‘Wait, what?'” 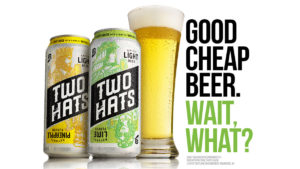 Two Hats is collaborating with alumni from the Chicago-based incubator program, The Remix Project, to offer a unique creative filter to its campaign. Bringing in the diverse perspectives of creatives and entrepreneurs in the arts and entertainment industries, The Remix Project and its alumni are helping the brand connect with new drinkers in a meaningful way.

Adapting to the digital lifestyle of this new generation, Two Hats will focus on sharing wide-ranging content, from video to memes and gifs, across various digital and social media platforms such as College Humour, Facebook and Instagram. Additionally, drinkers will have the opportunity to try Two Hats through local sampling and custom events across the US.

MillerCoors Unveil their New Line of Light Beers, Two Hats in the US added by Newsroom on February 8, 2018
View all posts by Newsroom →